The Great Escape from Stalag Luft III: The Memoir of Jens Müller (Hardcover) 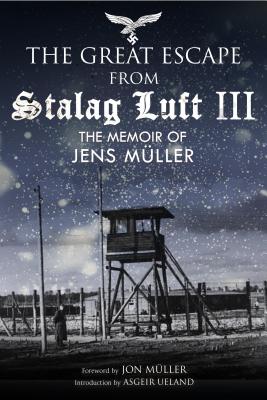 _"It took me three minutes to get through the tunnel. Above ground I crawled along holding the rope for several feet: it was tied to a tree. Sergeant Bergsland joined me; we arranged our clothes and walked to the Sagan railway station. _ _'Bergsland was wearing a civilian suit he had made for himself from a Royal Marine uniform, with an RAF overcoat slightly altered with brown leather sewn over the buttons. A black RAF tie, no hat. He carried a small suitcase which had been sent from Norway. In it were Norwegian toothpaste and soap, sandwiches, and 163 Reichsmarks given to him by the Escape Committee. __We caught the 2:04 train to Frankfurt an der Oder. Our papers stated we were Norwegian electricians from the Labour camp in Frankfurt working in the vicinity of Sagan.'_ Jens M ller was one of only three men who successfully escaped from Stalag Luft III in March 1944 - the break that later became the basis for the famous film the "Great Escape." M ller was no. 43 of the 76 prisoners of war who managed to escape from the camp (now in Żagań Poland). Together with Per Bergsland he stowed away on a ship to Gothenburg. The escapees sought out the British consulate and were flown from Stockholm and were flown to Scotland. From there they were sent by train to London and shortly afterwards to 'Little Norway' in Canada. M ller's book about his wartime experiences was first published in Norwegian in 1946, titled, 'Tre kom tilbake' (Three Came Back)_._ This is the first translation into English and will correct the impression - set by the film and Charles Bronson - that the men who escaped successfully were American and Australian. In a vivid, informative memoir he details what life in the camp was like, how the escapes were planned and executed and tells the story of his personal breakout and success reaching RAF Leuchars base in Scotland.