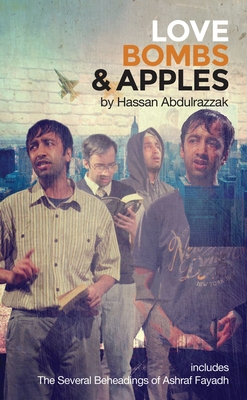 A Palestinian actor learns there's more to English girls than pure sex appeal. A Pakistani-born terror suspect figures out what's wrong with his first novel. A British youth suspects all is not what it seems with his object of desire. A New Yorker asks his girlfriend for a sexual favour at the worst possible time.

Love, Bombs & Apples is the comic tale of four men, each from different parts of the globe, all experiencing a moment of revelation.

Hassan Abdulrazzaks first play, Baghdad Wedding, premiered at Soho Theatre before being revived in Australia and India and broadcast on BBC Radio 3. The Prophet was performed at The Gate Theatre and was based on extensive interviews in Cairo with revolutionaries and soldiers, journalists and cab drivers. He was commissioned by the Kevin Spacey Foundation to write Dhow Under The Sun, a play for 34 young actors, which was staged in Sharjah, UAE. Hassan is the recipient of the George Devine, Meyer-Whitworth and Pearson Theatre Awards as well as the Arab British Centre Award for Culture.

Sexual fantasies, fictional bombs and racial hatred are just some of the themes explored in Love, Bombs & Apples... Abdulrazzak’s sharp writing is an explosive... a comically attune, excellent playwright who’s captivating tales hook an audience from start to finish.' A Younger Theatre

“Exquisite…impressive… the physical wit and economical elegance carry you on into empathy, beyond the daily horror of the headlines” The Times on Arab Nights.