I Wish to Die Singing: Voices from the Armenian Genocide (Paperback) 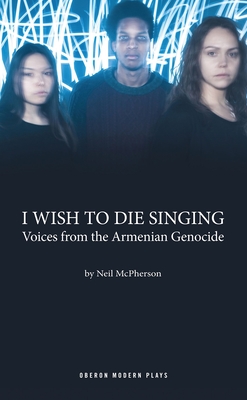 By Neil McPherson
Availability of this title may vary. Please email or call for price.

The Armenian Genocide was the first genocide of the 20th century, perpetrated by the Ottoman Turkish Government against the Armenians, a Christian minority in a Muslim state. One and a half million people died.

The word 'genocide' itself was invented by Raphael Lemkin in 1943 to describe the events of 1915. Adolf Hitler used the Armenian Genocide as a direct inspiration for the Holocaust during the Second World War. To this day, the Turkish government refuses to admit that any genocide ever took place. Commemorating the exact centenary of the deportations that began the Armenian Genocide, I Wish To Die Singing - Voices From The Armenian Genocide is a controversial documentary drama uncovering the forgotten secrets and atrocities of a denied genocide - featuring eye-witness reportage, images, music, poetry from Armenia's greatest poets, and verbatim survivors testimonies from one of the greatest historical injustices of all time.

Playwright Neil McPherson is Artistic Director of the Finborough Theatre. An earlier version of I Wish to Die Singing was presented for a sold out short run at the Finborough Theatre in 2005 to mark the 90th anniversary of the Armenian Genocide, and received a staged reading at the Centre for Armenian Information and Advice, London, in 2006.