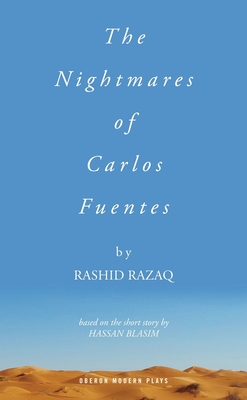 Based on the short story by Hassan Blasim.

Salim, an Iraqi refugee, takes on a new identity In London after fleeing persecution in Baghdad. He is picked up, and marries a wealthy older woman, who enthusiastically coaches him in the bedroom for his forthcoming citizenship test. But Carlos Fuentes finds that knowing the names of all six of Henry VIII's wives can neither satisfy his new wife nor turn him into a "Britishman". The nightmare of the violence of his past catches up with him, and suddenly he is at the airport, accompanied by a G4 security guard, waiting for a plane to take him back to Iraq.

Rashid Razaq is a playwright, screenwriter and journalist. His debut play The President and The Pakistani (directed by Tom Attenborough), based on the real-life story of Barack Obama and his illegal immigrant flatmate opened to strong reviews at the Waterloo East Theatre in run-up to the US presidential election in 2012. Rashid's short play Arab Spring was performed at the Nursery Festival in 2011 and was featured on BBC Arabic Service. His short play, Hardcore, was selected for a best of programme at the 503 Theatre. He is a graduate of the Royal Court Theatre's Young Writer's Programme. Rashid wrote Man and Boy which won Best Short at the Tribeca Film Festival 2011 and a top prize at the Aspen Film Festival. His previous short film Father was selected for festivals in the UK and internationally. He has co-written the forthcoming feature film Orthodox, about an Orthodox Jewish boxer and has another feature film in development. Rashid works as a reporter for the London Evening Standard covering subjects including crime, arts and politics.