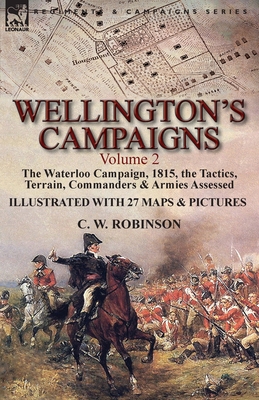 A Leonaur Original--never before available in this form

The Duke of Wellington is widely regarded as one of the finest British generals, and there are many books about his most famous campaigns during the Peninsular War in Portugal and Spain against Napoleon's French army. Accounts of Wellington's victory in 1815 at Waterloo, which brought about the final downfall of the emperor are, if anything, more numerous, such is the interest in the great captains who faced each other in the most renowned battle in world history. Leonaur has published many histories and personal accounts of those who fought in these campaigns, and although our two linked volumes by C. W. Robinson concern Wellington in the Peninsular War and Waterloo campaign respectively, they are quite different to most other books on the subject. In these books, originally intended for military students, and now of equal value to war-gamers, the campaigns are described from the perspective of the tactical choices and options open to the antagonists. The potential consequences, and the outcomes which may have arisen, had the choices that were made been from these other options are also discussed. These books therefore provide fascinating insights into the business of command, set against campaigns that are familiar and of abiding interest to military history students. Each volume contains maps and illustrations that did not appear in the texts when originally published in different form.