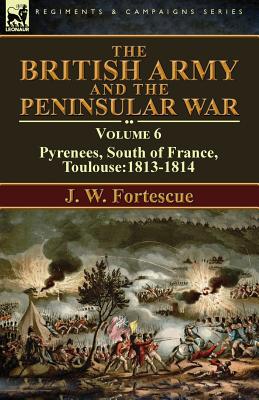 Volume 6 of the 6 volume history of the Peninsular War

Fortescue is rightly renowned for his multi-volume magnum opus, 'The History of the British Army', which, since it was written in the early decades of the twentieth century, feature the struggles with Napoleonic France, as a substantial part of the whole. These campaigns took place across the world but, for the British, most notably in Spain, Portugal and the South of France following the French invasion of Iberia. The numerous disconnected sections, within Fortescue's larger work, concerning the Peninsular War, have been extracted for the first time and carefully edited to create this six volume history. There can be no doubt that in Fortescue the British Army found one of its finest historians. His scholarship is superb, but is balanced by outstanding and fearless academic analysis. What makes this history incomparable and essential is that Fortescue was a contemporary of the other great British military historian of the modern age, Charles Oman, who wrote his own history of the Peninsular War. Fortescue conferred and collaborated with Oman to produce this work and within these pages the reader will discover both confirmations and qualified corrections to some of Oman's assertions on points of detail. Fortescue was extraordinarily thorough in his use of primary source material (which is annotated) and he additionally walked the ground of the campaign himself. The magnitude of the joint scholarship which brought this history into being cannot be overstated. This analysis of the Peninsular War differs significantly from Fortescue's other writings on the British Army, in that in embraces the activities of the French and the Spanish in some depth, thus creating a total view. This is a serious, academic, and thoroughly readable, history and no library of the subject can be truly said to be complete without it. The text has been complemented in this Leonaur edition by battlefield maps not present in the original publication.