The Far Campaigning Soldier: a Personal Account of Military service from 1781-1813 in the West Indies, the Egyptian Campaign and the Walcheren Expe (Paperback) 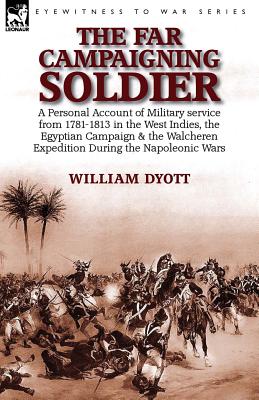 The Far Campaigning Soldier: a Personal Account of Military service from 1781-1813 in the West Indies, the Egyptian Campaign and the Walcheren Expe (Paperback)

Personal observations of small campaigns of the Napoleonic age The long period of the French Revolution, the Consulate and Napoleon's First Empire was notable not as a departure from almost perpetual hostility with the British, but because upon the conclusion of hostilities in 1815 the two nations never again went to war against each other. Military first-hand accounts from this era abound, though predictably most concern the theatres of war that engaged most soldiers of both sides, the Peninsular War and the Waterloo Campaign. Unusually the author of this engaging book of diary entries, whilst a serving soldier throughout this period, saw no action in those campaigns. Dyott's first action took him to the West Indies to take part in the suppression of a mulatto and Negro revolt provoked by the French. He next joined Abercromby on the expedition to defeat Napoleon's troops in Egypt, and subsequently upon the expedition to the island of Walcheren which became an infamous military debacle exacerbated by the pestilential conditions which killed scores of British troops. Dyott provides students of the Napoleonic period with unique, detailed and telling insights into 'side-show' campaigns-rarely covered in depth by others-from the perspective of an officer of the British Army. He was a prolific diarist who wrote many volumes about his affairs up to the mid 1840s, and his substantial writing about his time as a soldier, part of the whole, has possibly been overlooked for this very reason. This unique Leonaur edition confines itself to William Dyott's military career on active service.
Leonaur editions are newly typeset and are not facsimiles; each title is available in softcover and hardback with dustjacket.