Siborne's 1815 Campaign: Volume 2-The Fields of Waterloo, the Battle of the 18th June (Paperback) 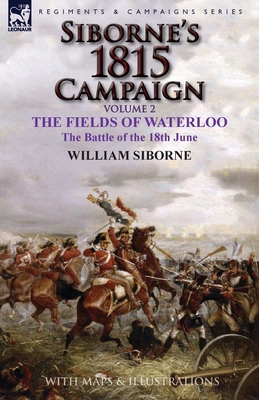 Siborne's 1815 Campaign: Volume 2-The Fields of Waterloo, the Battle of the 18th June (Paperback)

The conflict of the 18th June, 1815 Histories of the Battle of Waterloo abound, but this three volume set, covering the entire campaign, is truly exceptional and unique. For anyone who knows anything of the subject, the author's name reveals all. A contemporary of the events, it was Siborne who built the famous model of the battle and he who corresponded with dozens of the soldiers who fought during the conflicts of 1815 in Belgium and France to create a huge resource of information on the final defeat of the First Empire of the French. Siborne's 'Waterloo Letters' are famous and are the most comprehensive and essential of all source material of the campaign. This book, originally produced as one large volume, was the work which resulted from Siborne's research and is, therefore, unparalleled. The Leonaur Editors have represented Siborne's text making it more accessible to modern readers and added illustrations, diagrams and maps which were not present in the original edition. The complete work has been divided into three volumes each covering a different aspect of the campaign. The first relates the conflicts leading to the day of battle from the time Napoleon escaped from Elba, the second concerns the Battle of Waterloo itself, and the final volume describes the engagements that followed the battle and the pursuit to Paris. The text is rich in detail concerning the activities of each of the protagonist forces making this format useful for those interested in vital events-often absent in other books-which took place both before and after the Battle of Waterloo itself.
Leonaur editions are newly typeset and are not facsimiles; each title is available in softcover and hardback with dustjacket.