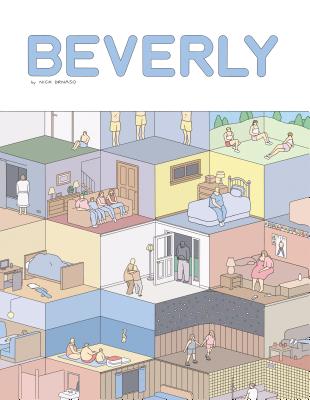 Connected by a series of gossipy teens, the modern lost souls of Beverly struggle with sexual anxieties that are just barely repressed and social insecurities that undermine every word they speak.

A group of teenagers pick up trash on the side of the highway--flirting, preening, and ignoring a potentially violent loner in their midst. A college student brings her sort-of boyfriend to a disastrous house party with her high-school acquaintances. A young woman experiences a traumatic incident at the pizza shop where she works and the fallout reveals the racial tensions simmering below the surface. Again and again, the civilized façade of Drnaso's pitch-perfect surburban sprawl and pasty Midwestern protagonists cracks in the face of violence and quiet brutality.

Drnaso's bleak social satire in Beverly reveals a brilliant command of the social milieu of twenty-first-century existence, echoing the black comic work of Todd Solondz, Sam Lipsyte, and Daniel Clowes. Precisely and hauntingly recounted, each chapter of Beverly reveals something new--and yet familiar--about the world in which we live.

Nick Drnaso was born in 1989 in Palos Hills, Illinois. He has contributed to several comics anthologies, self-published a handful of comics, been nominated for three Ignatz Awards, and coedited the second and third issue of Linework, Columbia College's annual comic anthology. Drnaso lives in Chicago, where he works as a cartoonist and illustrator.

“Nick Drnaso's Beverly captures such a recognizable, raw feeling of the "now" that if it was a film Drnaso would be heralded as a "stunning new directorial voice." If it was a novel, he would be a "literary sensation." But Beverly's chilled windowpane views into the fogged American psyche are not cartoon copies of film or literature. They're something completely new. A debut book by a young writer-artist who has not only absorbed but also advanced beyond the comics which have preceded him, Beverly is the finest and most electrically complex graphic novel I've read in years, announcing an intelligent, shrewd and disquieting talent not only to comics, but also to writing and visual art. It will set its barbs in you and not let go.” —Chris Ware, author of Building Stories

“Nick's precise drawings and unsettling stories present a world felt and filtered through a very particular (and palpable) consciousness, but not an ego, our world seen through alien, but not unsympathetic, eyes. It's impossible to predict what will happen from page to page, as narratives connect subtly and themes emerge slowly, but each re-reading bears new and satisfying surprises.” —Ivan Brunetti, author of Aesthetics, a Memoir

"Drnaso's stories and characters, and perhaps his view of the world are ... achingly realistic, and all too familiar."—Janet Potter, The Chicago Reader

"The combination of the repression and uncertainty the characters feel is echoed in the numerous panels that are wholly devoid of people, showing just places but no life. Beverly is an accomplished graphic novel, and is highly recommended." - The Quietus