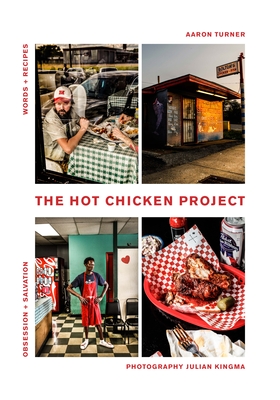 
On Our Shelves Now
An exploration and celebration of an iconic Southern food and culture.

The Hot Chicken Project is part recipe book (40 recipes covering the best mains, sandwiches, sides, salads and sauces), part narrative, part pictorial celebration of the history and power hot chicken holds over the city of Nashville - and beyond.

It frames the stories of the people and families and communities who have cooked and eaten and appropriated it in Nashville over several generations. It offers a loud, opinionated take-no-prisoners perspective on food culture in the US (and beyond) today, as well as being an incomparable how-to manual for the VERY best hot chicken and accompaniments - wherever you are.
Aaron Turner is the innovative and acclaimed chef and owner of the acclaimed IGNI, in regional Australia. A personal crisis led him to spending a couple of years in Nashville; this was where he discovered hot chicken. He returned to Australia to open IGNI in 2016, as well as The Hot Chicken Project. Turner was named chef of the year in 2016 and he has since continued to combine work at the highest levels of the restaurant scene with his second project championing the charms of real-deal Nashville-style hot chicken.