Lunch with Lucy: Maximize Profits by Investing in Your People (Hardcover) 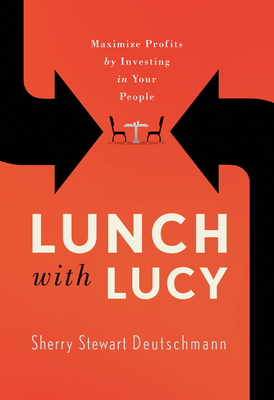 Lunch with Lucy: Maximize Profits by Investing in Your People (Hardcover)

When entrepreneur Sherry Deutschmann first decided to start a business, she knew she wanted to build something totally different. In her first book, Lunch with Lucy, Sherry tells the story of the creation of that company, LetterLogic, and how she turned it into a $40-million company by putting employees first--even ahead of customers and shareholders.

Putting her people first took many forms, with an extremely generous profit sharing plan and fair living wages among them. But the centerpiece and heart of LetterLogic's culture was the employee-centric practice Sherry designed called "Lunch with Lucy"--a practice that removed the hierarchical dynamics found in most organizations.

On any given Wednesday, any employee could invite "Lucy" (Sherry's midday moniker) out to lunch, at a place of their choice, with the bill picked up by Sherry. At these events, Sherry wasn't the CEO. She was "Lucy," a co-worker. By making herself 100% available, "Lucy" created a judgment-free environment where she could learn about a team member's dreams, ambitions, and challenges--and gain their insight into what she was doing right or wrong as a leader. She credits this approach with the success of her company.

Lunch with Lucy's interior, refreshingly laid out like courses on a menu, invites us to see how a leader's choices directly impact employee morale, engagement, and commitment--and in this author's case, ultimately led to a healthy and hearty bottom line. Sherry's voice is new, and her honesty, humor, and humility shine through this story of a woman building a successful business through empathetic leadership and uncommon, commonsense business practices, one lunch at a time.

Sit down at the table and learn about a business model that is truly transformational.

Sherry Stewart Deutschmann is a serial entrepreneur and angel investor. Her first venture was LetterLogic, Inc., a company she founded in her basement and grew to $40 million before selling it in 2016. LetterLogic was named an Inc. 5000 company (fastest-growing, privately held businesses in the United States) for ten consecutive years.Sherry was honored by President Barack Obama as a White House Champion of Change in 2016, and her company was visited by Tom Perez, after her fair living wage caught the attention of the then U.S. Secretary of Labor.Her employee-first culture brought recognition to LetterLogic from The New York Times, Forbes magazine, INC. magazine, Fast Company magazine, and from EY, who selected Sherry as one of their 2009 Entrepreneurial Winning Women.Sherry's passion is helping women-owned businesses get better access to networks, capital, and markets, and in 2015, she was appointed to the National Women's Business Council, a small group of women who advise Congress, the SBA, and the president on issues related to entrepreneurship for women.Since selling LetterLogic, Sherry has become an angel investor, specifically investing in women-owned and women-centric businesses. In the fall of 2019, Sherry founded BrainTrust, a company dedicated to helping women entrepreneurs grow their businesses to the pivotal $1 million-in-annual-revenue mark.Sherry is married to Mark Deutschmann, a real estate developer in Nashville, Tennessee, and is mother to Whitney, stepmother to Chelsea, and grandmother to Nikko and Reagan.