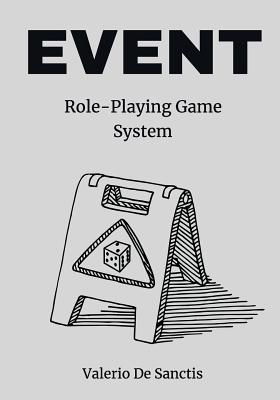 EVENT is a game system designed to collectively manage the actions and interactions of a variable number of characters played by players and / or the master from a given event. The combination of these factors will lead to the natural definition of a story within the context of reference, which is called the setting. The manual contains the main rules that allow you to start playing. None of these should be intended as mandatory or mandatory and each one of them can be modified or reviewed by mutual agreement between master and players: it is however advisable to play at least one or two games (which we'll call sessions from now on) with the standard rules in order to fully understand the basic game mechanics.At the end of each paragraph you'll find a text box containing a concrete example (actual play) of the rule explained above. In order to play Event you're going to need a group of friends, a handful of 6-sided dice, some paper sheets and at least one pencil. One of the players, known as the master, will take care of the core elements of the story, while the others, to whom we'll refer as players, will play the role of a single character apiece.This is the EVENT presentation & tutorial video, which illustrates some of the most original and innovative aspects of the game system: https: //youtu.be/DAIR374gDKAKEY FEATURESThe ruleset is based upon three distinctive design goals ("the 3S"): - Simple, as something that could be played with children who couldn't withstand complex systems (yet ).- Smart, i.e. which could be easily translated in any language.- Swift, as being playable within a single evening.These are EVENT's most distinctive features: - A narrative premise (the event) that will motivate the players to act as a group, providing their characters a common goal.- A brand-new character creation system (the Three Questions) that will allow players and gamemasters to build PCs and NPCs in few minutes using a narrative-based approach.- Solid action's and interaction's outcome ruleset that can be used by the players to partially take control of the story, thus becoming the gamemaster for a short while to conceive and narrate what happens.- Innovative contest resolution mechanics (aka showdowns) that will force players to choose between winning a contest or narrating its outcome (or try to do both things), similar to those featured in most auction-based Board Games.CROWFUNDINGIn order to support the project's development the EVENT authors recently started a crowfunding campaign on the Kickstarter platform, which is expected to undergo until September 30, 2018. Among the many rewards reserved for the backers, there is the chance to: insert your name or nickname on the thank you page within the game manual; give a custom name to a sample character or player in the many Actual Play examples contained in the manual; write your very own Actual Play example; pre-purchase a copy of the Event Paperback Edition, which will also contains original artwork and pictures, and more.If you want to support the crowfunding, you can do that from this link.https: //www.kickstarter.com/projects/darkseal/event-a-minimalistic-tabletop-role-playing-game/