We Are Lost and Found (Paperback) 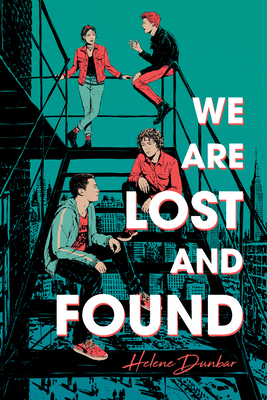 We Are Lost and Found (Paperback)

From "the queen of heartbreaking prose" (Paste) Helene Dunbar, We Are Lost and Found is a young adult realistic fiction novel in the vein of The Perks of Being a Wallflower about three friends coming-of-age against the backdrop of the AIDS crisis in the early 1980s.

Michael is content to live in the shadow of his best friends, James and Becky. Plus, his brother, Connor, has already been kicked out of the house for being gay and laying low seems to be Michael's only chance at avoiding the same fate.

To pass the time before graduation, Michael hangs out at The Echo where he can dance and forget about his father's angry words, the pressures of school, and the looming threat of AIDS, a disease that everyone is talking about, but no one understands.

Then he meets Gabriel, a boy who actually sees him. A boy who, unlike seemingly everyone else in New York City, is interested in him and not James. And Michael has to decide what he's willing to risk to be himself.

This book is perfect for:

Praise for We Are Lost and Found:
"Dunbar painstakingly populates the narrative with 1980s references—particularly to music—creating a vivid historical setting... A painful but ultimately empowering queer history lesson."—Kirkus Reviews
"It's a certain type of magic that Helene Dunbar managed with this story... A hauntingly beautiful, yet scarring story that captures the struggles of figuring out who you are while facing the uncertainties of the world, a story that should be mandatory reading for all."—The Nerd Daily
"We Are Lost and Found absolutely sparkles... she so perfectly, so evocatively captures the angst, uncertainty, and shaky self-confidence of adolescence that it might make you wince."—Echo Magazine

Helene Dunbar is the author of several novels for young adults including These Gentle Wounds, What Remains, Boomerang, We Are Lost and Found, and Prelude for Lost Souls. Over the years, she's worked as a drama critic, journalist, and marketing manager, and has written on topics as diverse as Irish music, court cases, and theater. She lives in Nashville with her husband and daughter. Visit her online at helenedunbar.com