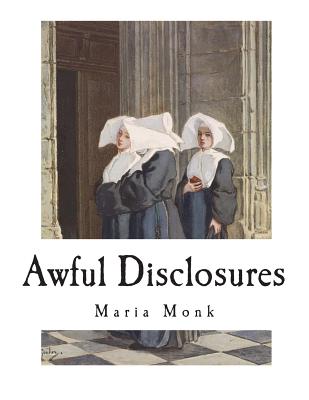 
Special Order - Usually Arrives in 1-5 Days
- This book cannot be returned
Awful Disclosures: The Horrors of Convents Life by Maria Monk. Maria Monk (June 27, 1816 - summer of 1849) was a Canadian woman whose book Awful Disclosures of Maria Monk, or, The Hidden Secrets of a Nun's Life in a Convent Exposed (1836) claimed to expose systematic sexual abuse of nuns and infanticide of the resulting children by Catholic priests in her convent in Montreal. The book became a best-seller. This volume embraces not only my "Awful Disclosures," but a continuation of my Narrative, giving an account of events after my escape from the Nunnery, and of my return to Montreal to procure a legal investigation of my charges. I was now, she told me, to have access to every part of the edifice, even the cellar, where two of the sisters were imprisoned for causes that she did not mention. I must be informed that one of my great duties was to obey the priests in all things; and this I soon learnt, to my utter astonishment and horror, was to live in the practice of criminal intercourse with them. I expressed some of the feelings which this announcement excited in me, which came upon me like a flash of lightning; but the only effect was to set her arguing with me, in favour of the crime, representing it as a virtue acceptable to God, and honourable to me.