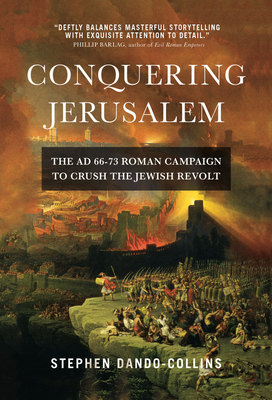 Dando-Collins chronicles the First Jewish Revolt (66-73 AD) with impressive detail and a fast-paced narrative. I learned so much — for instance, Roman commander Titus did not intend for the Second Temple to be destroyed. Both sides were brave and brutal, showing fortitude and folly, and while the moral high ground is murky, the consequences of these pivotal few years still reverberate to this day.

Dando-Collins details the conflict from both sides of the 7-year campaign. His examination of the revolt draws upon numerous archaeological and forensic discoveries made in recent years to illuminate the people and events as never before.

Neither side emerges from the conflict unscathed. Both were at times equally heroic and barbaric. In the end, the Jewish freedom fighters lost the war and lost Jerusalem, their holy city- the focus of the campaign by both sides. Yet today, Jerusalem is once more the heart of the Jewish faith, while, thanks to Christianity-an offshoot of Judaism-the Roman Empire and its gods are long gone.

Conquering Jerusalem illustrates that faith can have its rewards, and the tables can be turned, if you wait long enough.