The Birth of Rock 'n' Roll: The Illustrated Story of Sun Records and the 70 Recordings That Changed the World (Hardcover) 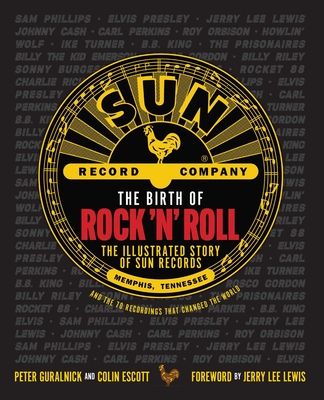 The Birth of Rock 'n' Roll: The Illustrated Story of Sun Records and the 70 Recordings That Changed the World (Hardcover)


On Our Shelves Now
A fascinating look at the history of Sun Records, the label that started Rock n’ Roll, told through 70 of its iconic recordings.

In Memphis, Tennessee, in the 1950s, there was hard-edged blues playing on Beale Street, and hillbilly boogie on the outskirts of town. But at Sam Phillips’ Sun Records studio on Union Avenue, there was something different going on – a whole lotta shakin’, rockin’, and rollin’.

This is where rock ’n’ roll was born.

The Birth of Rock ’n’ Roll: 70 Years of Sun Records is the official history of this legendary label, and looks at its story in a unique way: through the lens of 70 of its most iconic recordings. From the early days with primal blues artists like Howlin’ Wolf and B.B. King to long nights in the studio with Elvis and Jerry Lee Lewis, you will see how the label was shaped and how it redefined American music. Accompanying the recordings is the label’s origin story and a look at the mission of the label today, as well as “Sun Spot” sidebars—a fascinating dive into subjects such as how the iconic logo was created, the legendary Million Dollar Quartet sessions, and how the song “Harper Valley, PTA” funded the purchase of the label.

Written by two of the most acclaimed music writers of our time, Peter Guralnick and Colin Escott, and featuring hundreds of rare images from the Sun archives as well as a foreword by music legend Jerry Lee Lewis, this is a one-of-a-kind book for anyone who wants to know where it all started.
Award-winning and best-selling author Peter Guralnick is widely regarded as the nation’s preeminent writer on twentieth-century American popular music. His books include the two-volume biography of Elvis Presley, Last Train to Memphis and Careless Love; and the biography of Sun records founder Sam Phillips: The Man Who Invented Rock ’n’ Roll. He is a Grammy award winner and an inductee in the Blues Hall of Fame.

Colin Escott is the foremost authority on Sun Records. He wrote the company’s history in 1975 and has revised and expanded it several times since. He has published several other volumes on the early days of country music, has won a Grammy for his work on Mercury Records’ The Complete Hank Williams, and received a Tony nomination for the book for Million Dollar Quartet in 2010.

Jerry Lee Lewis is a legendary musician, and a pioneer of rock ’n’ roll. He is a multiple Grammy Award winner and was inducted into the Rock ’n’ Roll Hall of Fame in 1986.