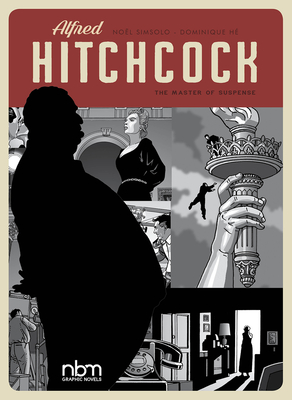 By Noel Simsolo, Dominique He (Illustrator)

Who can deny the thrill of Hitchcock’s cinematic masterpieces? Both the work and the man are intriguing. He said, “There is no terror in the bang, only in the anticipation of it.” He CREATED suspense, the feeling that grows in the pit of your stomach and makes your palms sweaty as you watch. The music builds it. The actions build it. The camera angles build it. This graphic novel explores the man as well as his work.

— Ashby
“Psycho” traumatized viewers around the world. Never before had the angst or the suspense been so well presented in cinema. But where does the talent of this Alfred Hitchcock come from, the one nicknamed the "Master of Suspense"? To find out, we must first go back to his youth, in England, during the first half of the 20th century. Having grown up in a Catholic family - a religious originality that will be felt in a large part of his cinema - “Hitch” is an atypical Englishman who, very early on, has a taste for telling chilling stories. The temptation to work for the cinema will not be long in coming, first as a graphic designer where his visual talent will lead him to make his debut behind the camera, as an assistant and then as a full director. It is also here that he will meet Alma Reville, his assistant and wife who will accompany him throughout his storied career, including the jump to the big time in Hollywood.
Discover the life of undoubtedly one of the greatest filmmakers of all time, the in-depth story film by film, with plenty of juicy anecdotes and amazing insights from interviews with Francois Truffaut and others, of a colorful and quite simply extraordinary artist.

Noel Simsolo is a French comedian, movie director, novelist, historian of movies, and well-established writer of comics. Amongst others, he’s also written a bio of Sergio Leone. Dominique Hé is a widely published French comic artist and illustrator.
"4.5 Stars out of 5. This is an odd book, a mildly fictionalized biography of Alfred Hitchcock done without real clues as to which parts are fiction. Much of the story is told in flashback, in a supposed conversation between Hitchcock and Cary Grant, but other parts are told in a style reminiscent of Hitchcock’s own movie work. Hitchcock’s story, as told here, is of a man working very hard to create real art in the movie medium, but realizing that his efforts were not always recognized." --Nick Smith, ICv2