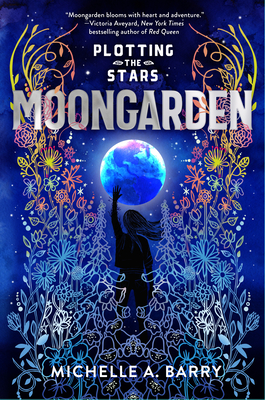 By Michelle A. Barry

Mix The Secret Garden with science fiction, magic, and a robot friend, and you get this fun new series!

— Rae Ann
"Moongarden blooms with heart and adventure. A stellar update of The Secret Garden, woven with a little science fiction, a lot of magic, a vibrant heroine, and a plucky robot sidekick to rival R2-D2." —Victoria Aveyard, New York Times bestselling author of Red Queen

The Secret Garden meets The City of Ember. Failed climate change policy, an intergalactic conspiracy, and the magical, unlikely heroine who could unearth it all. An explosive STEAM-inspired series starter perfect for young change makers.

Centuries ago, Earth’s plants turned deadly, and humanity took to space to cultivate new homes. Myra Hodger is in her first year at an elite school on the Moon, and she’s crumbling under the pressure. She doesn’t fit in and, worse, the tattoos that signal her Number Whisperer magic aren’t developing. In her heart, she knows she doesn’t have a Creer, and soon everyone else will, too.

Wandering the halls while cutting class, she discovers a secret lab hidden behind one of the unused classrooms and, beyond that, a secret garden overflowing with plants. Dangerous toxic plants.

As she learns more about the garden, Myra begins to wonder if she does have a Creer after all—one that died out when the Earth did. One that could help solve the food shortages the government doesn’t want anyone to know about.

Re-envisioning The Secret Garden for a new generation, Moongarden weaves together STEAM themes and intense social pressures in a stunning series starter, and introduces a dynamic heroine who might just grow a revolution.
Michelle A. Barry grew up in Springfield, Massachusetts, and was later cajoled over the border into Connecticut by her future husband. She has worked as a newspaper reporter, freelance writer and editor, and marketing professional. She currently lives in Connecticut with her charming husband and their two delightful children. Moongarden is her first novel.
★ "This Secret Garden retelling . . . works beautifully in its new space setting. . . . The storytelling is immersive and engrossing, touching on environmental issues, class structure and prejudice, and the struggle to find one’s truest self. Readers will be eager for the next installment in this marvelous, magical universe."—Booklist, Starred Review

"Twelve-year-old Myra’s about as scrappy and inspired as they come, and readers will likely be eager to see what she does next. ."—The Bulletin of the Center for Children's Books