Made to Change the World: How Ordinary People Are Called To Do Extraordinary Work, The Story of Project 615 (Hardcover) 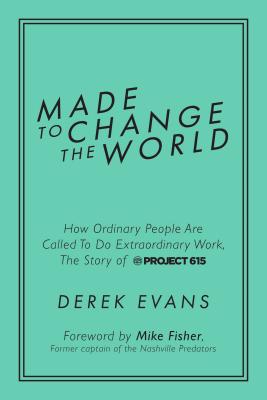 Made to Change the World: How Ordinary People Are Called To Do Extraordinary Work, The Story of Project 615 (Hardcover)


Availability to be confirmed
The remarkable story of a T-shirt company that sparked a global movement to aid people living in poverty.

All his life, Derek Evans felt a spiritual pull to be a part of something greater than himself, but it wasn’t until he and a friend embarked on a transformational trip to LA’s infamous skid row that he found his true calling. They returned home with a plan to build a mission-minded business that would change the world—one T-shirt at a time. When their “Spread Love, It’s the Nashville Way” grassroots campaign to raise money for people recovering from homelessness and addiction caught the attention of celebrities like Lady Gaga and Miley Cyrus, it went viral and ignited a global movement to end homelessness, child hunger, and human trafficking.

Made to Change the World is both an inside look at one man’s passionate drive to make a difference, and a call to action for anyone who has ever dreamed of being a part of something that changes the world.
Derek Evans is president and co-founder of Project 615. In 2010, he launched his apparel company to do “work that matters” and utilize that platform to help change the world. Derek has helped hire fifty-four people recovering from homelessness, built an orphanage in Uganda, and raised over half a million dollars for various world-changing non-profit organizations. He lives with his wife in Nashville, TN. One hundred percent of the author’s profits for this book will be donated to Set Free Ministry.
"Partnering with Project 615 around my two Nashville 'Home Team Tour' Headline shows in 2017 was such an organic fit for me and my wife Lauren. Being able to work with a philanthropic-minded company in our home town of Nashville and create a product that celebrated our home state, while benefiting another Nashville-based charity and a cause that is so close to our hearts, made it a true representation of the 'Home Team' philosophy that is at the core of everything we try to do. Whenever you can create something your fans want that in turn can provide real world-changing support and assistance to those who need it, it's a genuine win-win. And Project 615 has been so great at achieving this balance."
— Thomas Rhett, Grammy-nominated Country Musician

"Proof that something as small and simple as a t-shirt can change—and even save—a life. A compelling read daring each of us to consider how we can impact and make a difference in the lives, communities, and world around us."
— Eddie George, Heisman Trophy Winner and Former Professional Football Player