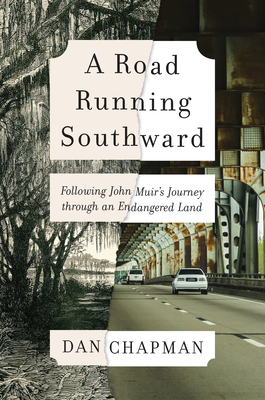 In 1867, John Muir set out on foot to explore the botanical wonders of the South, keeping a detailed journal of his adventures as he traipsed from Kentucky southward to Florida. One hundred and fifty years later, on a similar whim, veteran Atlanta reporter Dan Chapman, distressed by sprawl-driven environmental ills in a region he loves, recreated Muir’s journey to see for himself how nature has fared since Muir’s time. Channeling Muir, he uses humor, keen observation, and a deep love of place to celebrate the South’s natural riches. But he laments that a treasured way of life for generations of Southerners is endangered as long-simmering struggles intensify over misused and dwindling resources. Chapman seeks to discover how Southerners might balance surging population growth with protecting the natural beauty Muir found so special.

Each chapter touches upon a local ecological problem—at-risk species in Mammoth Cave, coal ash in Kingston, Tennessee, climate change in the Nantahala National Forest, water wars in Georgia, aquifer depletion in Florida—that resonates across the South. Chapman delves into the region’s natural history, moving between John Muir’s vivid descriptions of a lush botanical paradise and the myriad environmental problems facing the South today. Along the way he talks to locals with deep ties to the land—scientists, hunters, politicians, and even a Muir impersonator—who describe the changes they’ve witnessed and what it will take to accommodate a fast-growing population without destroying the natural beauty and a cherished connection to nature.

A Road Running Southward is part travelogue, part environmental cri de coeur, and paints a picture of a South under siege. It is a passionate appeal, a call to action to save one of the loveliest and most biodiverse regions of the world by understanding what we have to lose if we do nothing.

Dan Chapman is a writer, reporter, and lover of the outdoors. He grew up in Washington DC and Tokyo, the son of a newspaperman and an English teacher. He worked for Congressional Quarterly, The Winston-Salem Journal, The Charlotte Observer, and The Atlanta Journal-Constitution. He has also reported from Asia, Europe, and the Middle East. He currently writes stories about conservation in the South for the U.S. Fish and Wildlife Service.

"[A Road Running Southward alternates] between jeremiad and dark satire...[where] walking, for Mr. Chapman, is a form of activism as well as personal penance, a way of making himself see, and feel, the drastic changes in a lacerated landscape he still loves."
— The Wall Street Journal

"Not all journeys in somebody else’s footsteps prove especially comforting. In A Road Running Southward: Following John Muir’s Journey Through an Endangered Land, the Georgia journalist Dan Chapman retraces the ecologist John Muir’s thousand-mile walk through the Reconstruction-era South, and what he finds there today is alarming.."
— The New York Times

"Part-love letter to the natural world, the travelogue is primarily an environmental cri de coeur about the ecological devastation wrought by global warming and the misuse of dwindling resources."
— ArtsATL

"Chapman offers a lucid feature-story narrative with a splash of gonzo…. Chapman may be following Muir’s footprints, but as a work of environmental consciousness-raising, this book’s true inspiration may be Rachel Carson."
— Booklist

"A Road Running Southward revisits Muir’s 1867 trip from Louisville, Ky., to Cedar Key, Fla., and provides an important, sweeping update of the environmental situation in this part of the world…. It is the kind of book that, one can hope, will radicalize the next generation of environmentalists."

“Reading Chapman’s book is similar to sitting atop a meta­phorical fire tower because it provides a panoramic view of the ecological challenges in the Southeast—from river pollution to invasive species. It also provides insight into Muir’s legacy…. the book is a tour de force.”

"Retracing the sauntering travels of one of the country’s most interesting historical figures, Dan Chapman takes readers on a journey through the natural wonderland of the American South. The journey is sometimes heartbreaking, sometimes uplifting, and always edifying."
— Jack Davis, Pulitzer Prize-winning author of "The Gulf" and "The Bald Eagle"

"Dan Chapman’s new book is a celebration of America’s nineteenth-century Southern wilderness, and a wake-up call for the beloved, yet endangered, region today. Chapman guides us through a long-ago dazzling, buzzing, glittering world of forests, meadows, rivers, and marshes—dangerously diminished today by urban sprawl and heedless development, but not yet completely vanished from the earth."
— Melissa Fay Greene, author of "Praying for Sheetrock" and "The Temple Bombing"

"John Muir’s long walk to the Gulf was a crucible of environmental thinking on Planet Earth—it is where he began to posit that perhaps man was not at the center of all. As Dan Chapman makes clear, it’s an idea still struggling to be heard—especially, perhaps, in the American South where it was first formed."
— Bill McKibben, author of "Wandering Home"