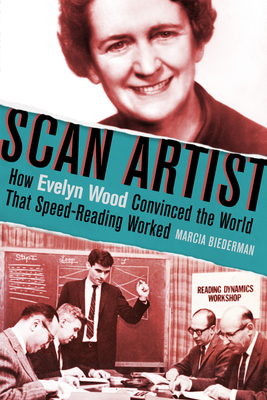 
On Our Shelves Now
The best-known educator of the twentieth century was a scammer in cashmere. “The most famous reading teacher in the world,” as television hosts introduced her, Evelyn Wood had little classroom experience, no degrees in reading instruction, and a background that included work at the Mormon mission in Germany at the time when the church was cooperating with the Third Reich. Nevertheless, a nation spooked by Sputnik and panicked by paperwork eagerly embraced her promises of a speed-reading revolution. Journalists, lawmakers and two US presidents lent credibility to Wood’s claims of turbocharging reading speeds through a method once compared to the miracle at Lourdes. Time magazine reported Woods grads could polish off Dr. Zhivago in one hour; a senator swore that Wood's method had boosted his reading speed to more than ten thousand words per minute.

But science showed that her method taught only skimming, with disastrous effects on comprehension—a fact Wood was aware of from early in her career. Fudging test results, and squelching critics, she founded a company that enrolled half a million. The course’s popularity endured even as evidence of its shortcomings continued to accumulate. Today, as apps and online courses attempt to spark a speed-reading revival, this engaging look at Wood’s rise from mission worker to marketer exposes the pitfalls of embracing a con artist's worthless solution to imaginary problems.
Marcia Biederman is a writer who has appeared in the New York Times, Crain's New York Business, New York Magazine, the New York Observer, and Newsday. She is also the author of Popovers and Candlelight: Patricia Murphy and the Rise and Fall of a Restaurant Empire She lives in New York.
"I read Scan Artist in thirty minutes! Actually, I didn't, because the Evelyn Wood method doesn't work. But when I did mosey my way through this enjoyable book, I found a great tale of American hucksterism." —Jonathan Alter, New York Times bestselling author of The Center Holds: Obama and His Enemies

"Scan Artist is a riveting portrait of an underrepresented archetype: the female con artist. Meticulously researched and cinematically plotted, Marcia Biederman's book excavates biographical details that paint a comprehensive picture of Evelyn Wood's milieu and motivations. Though I did not read at the rate of thousands of words per minute, as Wood may have claimed, my pages turned rapidly as I devoured this dastardly, delightful character." —Elizabeth Greenwood, author of Playing Dead: A Journey Through the World of Dead Fraud

"If Americans could split the atom, track satellites in outer space, and build missiles, why shouldn't reading methods also make spectacular advances? The fact that supersonic reading becomes skimming did not deter Utah teacher Evelyn Wood. Beiderman's thoroughly researched biography deserves to be read slowly. It is a fascinating case study of the thin line between adroit marketing and misleading hyperbole." —Robert L. Hampel, author of Fast and Curious: A History of Shortcuts in American Education

"A highly recommended examination of the life of Evelyn Wood and her Reading Dynamics program." — She Treads Softly

"...a compelling biography wrapped in the rare true story from the education sector. A page-turner, it could easily be read one sitting...maybe even an hour for a faster reader."—Plucked from the Stacks

“Scan Artist thoroughly portrays Wood’s rise and fall as well as the need to beware the deal that seems too good to be true. It always is.”—HistoryNet