Over at Uncle Joe's: Moscow and Me (A Glimpse at Post-WWII Soviet Union from an American Traveler and Correspondent) (Hardcover) 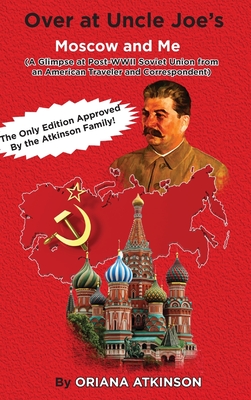 THE ONLY EDITION APPROVED BY THE ATKINSON FAMILY

Oriana Atkinson (1895-1989) was a wide-ranging novelist and journalist of the WWII era and in this amazing best-seller, Over at Uncle Joe's: Moscow and Me, she expounds on her short but hilarious time in Moscow in 1945-46 with her husband, Brooks Atkinson, correspondent for the New York Times and winner of the Pulitzer Prize for Correspondence in 1947 for his observations in the war-torn and totalitarian government of the U.S.S.R. from Moscow. It is with Oriana's unassuming, unaffected, but definitely humorous writing that she describes the complexity of life in the Communist state of Stalin (Uncle Joe as he was often described by the citizenry and his propagandist media), highlighting that even those used to confusion and scarcity from war and socialist rule can be unique and bonded to life, family, and love.

THE ONLY EDITION APPROVED BY THE ATKINSON FAMILY