Unmask Alice: LSD, Satanic Panic, and the Imposter Behind the World's Most Notorious Diaries (Hardcover) 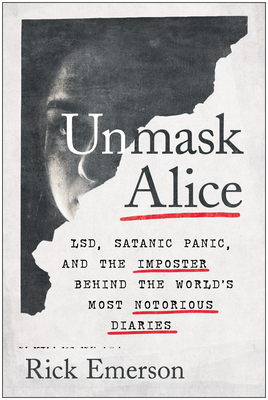 Unmask Alice: LSD, Satanic Panic, and the Imposter Behind the World's Most Notorious Diaries (Hardcover)

"Two Teens. Two Diaries. Two social panics. One Incredible Fraud" Wow! As someone who read Go Ask Alice as a young person I was totally riveted by this book unpacking the colossal lie that it all was. While I had not heard of the other memoir, Emerson did a great job connecting them and situating them so well in the cultural moment . I read non-fiction sparingly but I really dug this book.

— Katie
"Unmask Alice by Rick Emerson goes a long way to showing what investigative journalism could be in the right hands . . . this book is undeniably buzzworthy." —Portland Book Review


"An absorbing and unnerving read . . . this book demands to be finished in one sitting." —Booklist

But Alice was only the beginning.

In 1979, another diary rattled the culture, setting the stage for a national meltdown. The posthumous memoir of an alleged teenage Satanist, Jay's Journal merged with a frightening new crisis—adolescent suicide—to create a literal witch hunt, shattering countless lives and poisoning whole communities.

In reality, Go Ask Alice and Jay's Journal came from the same dark place: Beatrice Sparks, a serial con artist who betrayed a grieving family, stole a dead boy's memory, and lied her way to the National Book Awards.

Unmask Alice: LSD, Satanic Panic, and the Imposter Behind the World's Most Notorious Diaries is a true story of contagious deception. It stretches from Hollywood to Quantico, and passes through a tiny patch of Utah nicknamed "the fraud capital of America." It's the story of a doomed romance and a vengeful celebrity. Of a lazy press and a public mob. Of two suicidal teenagers, and their exploitation by a literary vampire.

Unmask Alice . . . where truth is stranger than nonfiction.
Rick Emerson is a longtime radio and television broadcaster, the former host of the nationally-syndicated Rick Emerson Show, and the coauthor (with Lisa Desjardins) of Zombie Economics: A Guide to Personal Finance. He's a regular guest on America's finer podcasts, and can be seen in occasional television roles and a truly dreadful commercial for tires. He lives in Portland, Oregon with his two dogs, Willard and Philo.