A Generous Pour: Tall Tales from the Backroom of Jimmy Kelly's (Hardcover) 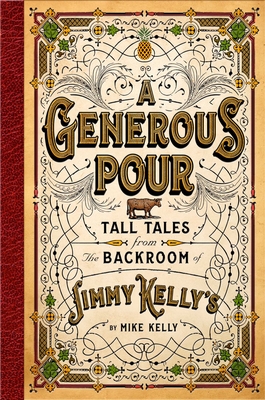 A Generous Pour: Tall Tales from the Backroom of Jimmy Kelly's (Hardcover)


On Our Shelves Now
The story of Jimmy Kelly's Steak House, Nashville's oldest fine restaurant and the family who started it—of stills, saloons, and speakeasies, and of a family who was tough and resourceful, who lost everything, and picked themselves up and started again.

When young James Kelly fled the Irish Famine in 1848, he arrived in America with a roll of copper tubing under his shirt. To make whiskey, of course. And he did—in the green rolling hills of Middle Tennessee. Later his son John would open a saloon, initiating the family custom of serving up “a great steak and a generous pour of whiskey” that continues to this day.

Readers will delight in tales of bootleggers and rumrunners, saloons and speakeasies, of hard workers with strong family values, the old genteel Nashville and the new Nashville recording industry, and the mysterious difference between whiskey and bourbon. There are stories about Jack Daniel, Roy Rogers and Dale Evans (and even Trigger), Al Capone, Bob Dylan, Grantland Rice, John Jay Hooker Sr., and local characters only a Nashvillian could love.

The story of the Kelly family in Tennessee takes readers from the Civil War to Nashville’s postwar boom and the turn of a new century: the Roaring 20s that followed the first World War, the temperance movement that led to Prohibition, and the speakeasy solution that led honest Kelly men to defy a patently bad law as they built a family legacy of beloved restaurants in Nashville. Mike Kelly—James’s great-grandson—has written a fine and rollicking tale of a most interesting time in American history. His affection for his family and his community shows on every page.
The proprietor of the famed Jimmy Kelly’s Steakhouse in Nashville is descended from a clan equally as memorable as his ancestors’ family friends, Tennessee whiskey maker Jack Daniel and his nephew, Lem Motlow. In fact, it was Mike Kelly’s great-grandfather, James Kelly, who was the one distilling the whiskey when he and Motlow first met. James owned a length of valuable copper tubing, with which he had departed Ireland, that would sustain him in America, as he made his way from the docks of New York down to the glorious green fields of the Volunteer State.

The author, a former Tennessee Restauranteur of the Year and past chairman of the Nashville Metro Tourism & Convention Commission, knows more than a thing or two about Southern hospitality. He has helmed Music City’s oldest fine dining establishment for the last four decades.

As Jimmy Kelly’s Steakhouse enters into its eighty-eighth year of uninterrupted service, Mike Kelly continues to extend his family’s phenomenal legacy by offering diners, celebrities, and friends two of life’s most important things: a good steak and a generous pour.