Joan Didion: What She Means (Hardcover) 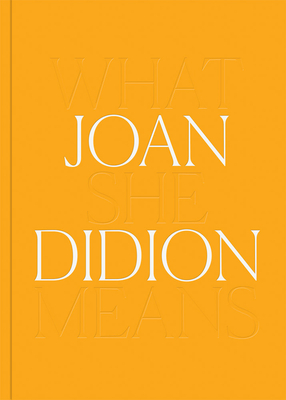 Joan Didion: What She Means (Hardcover)

An exploration of the visual corollary to Didion's life and work and the feeling that each generates in her admirers, detractors and critics--including artists from Helen Lundeberg to Diane Arbus, Betye Saar to Maren Hassinger, Vija Celmins and Andy Warhol

In Joan Didion: What She Means, the writer and curator Hilton Als creates a mosaic that explores Didion's life and work and the feeling each generates in her admirers, detractors and critics.
Arranged chronologically, the book highlights Didion's fascination with the two coasts that made her. As a Westerner transplanted to New York, Didion was able to look at her native land, its mores and fixed rules of behavior, with the loving and critical eyes of a daughter who got out and went back. (Didion and her late husband moved from New York to Los Angeles in 1964, where they worked as highly successful screenwriters, producing scripts for 1971's The Panic in Needle Park and 1976's A Star Is Born, among other works, before returning to New York 20 years later.) And from her New York perch, Didion was able to observe the political scene more closely, writing trenchant pieces about Clinton, El Salvador and most searingly the Central Park Five. The book includes more than 50 artists ranging from Brice Marden and Ed Ruscha to Betye Saar, Vija Clemins and many others, with works in all mediums including painting, ephemera, photography, sculpture, video and film. Also included are three previously uncollected texts by Didion: "In Praise of Unhung Wreaths and Love" (1969); a much-excerpted 1975 commencement address at UC Riverside; and "The Year of Hoping for Stage Magic" (2007).