To Skin a Skunk (Paperback) 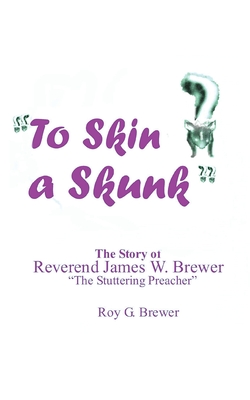 To Skin a Skunk (Paperback)


Special Order - Usually Arrives in 1-5 Days
Roy Brewer is the grandson of the Reverend J. W. Brewer, the subject of this book. He grew up in same house built in 1907 by his grandfather. Although Roy was not born until 5 years after his grandfather's death, he heard many stories about his grandfather, famously known as"The Stuttering Preacher" from his parents, his older siblings, and townspeople. When researching for his previous book "Seventh Son, A Northeast Texas Boyhood," Roy found numerous anecdotes and testimonials in local newspapers across the South and Texas about his grandfather. The stories motivated him write about the Stuttering Preacher. The book details the traumatic personal losses of Rev. Brewer in the swamps of eastern Arkansas, his overcoming speech impediments to forge a successful family, political, social and religious life. It is replete with stores about and from him, his witticisms and his religious crusades. Roy Brewer is a retired lawyer residing with his wife Cathy in Des Moines, Washington. He and his wife of 50+ years have one daughter, Renee Dawn. He is the author of "Seventh Son, A Northwest Texas Boyhood" about his growing up in Enloe, Texas in the 1950s. He is a veteran of the U.S. Navy serving in Guantanamo Cuba during the crisis of the 1960s and a former Volunteers in Service to America (VISTA), now AmeriCorps, serving in inner city Chicago in 1967. He was licensed to preach the gospel by the Enloe Baptist Church in 1958.