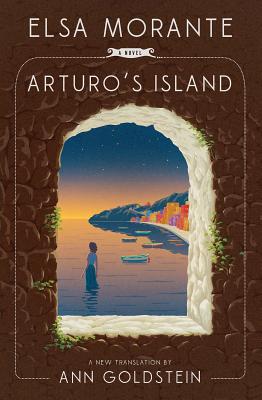 Elsa Morante’s novels are “astonishing for the quality of the writing, . . . the complexity of the invented world, the wide-ranging view of the human condition” (Elena Ferrante).

Once considered the greatest writer of Italy’s postwar generation—and admired by authors as varied as John Banville and Rivka Galchen—Elsa Morante is experiencing a literary renaissance, marked not least by Ann Goldstein’s translation of Arturo’s Island, the novel that brought Morante international fame. Imbued with a spectral grace, as if told through an enchanted looking glass, the novel follows the adolescent Arturo through his days on the isolated Neapolitan island of Procida, where—his mother long deceased, his father often absent, and a dog as his sole companion—he roams the countryside and the beaches or reads in his family’s lonely, dilapidated mansion. This quiet, meandering existence is upended when his father brings home a beautiful sixteen-year-old bride, Nunziatella.

A novel of longing and thwarted desires, filled with Morante’s “brutal directness and familial torment” (James Wood), Arturo’s Island reemerges in this splendid translation to take its rightful place in the world literary canon.

Elsa Morante (1912– 1985) was a prize-winning Italian novelist and poet. Born in Rome, Morante was married to Albert Moravia.

Ann Goldstein, the editor of The Complete Works of Primo Levi and the award-winning translator of Elena Ferrante’s novels, is a former editor at The New Yorker.
The book’s themes — incest, misogyny, narcissism, homosexuality — slide across the pages like lava. Morante delivers epic emotions. Her people don’t talk so much as they exclaim 'with a contemptuous sneer' or 'a loud, haughty cry of derision.' They tremble with violent disgusts and savage attitudes. They strike poses of fear, loathing and, in the words of one character, 'aggressive, insolent vehemence.' They rattle the cutlery and they rattle each other. Arturo’s Island kept calling out to me, however. It had set its brutal hooks.... [Morante’s writing] has the power of malediction.

I am pleased that Arturo’s Island is having a second life, as, no doubt, the novel will garner its neglected author the new readers she deserves. A coming-of-age story—often compared to Alain-Fournier’s “Le Grand Meaulnes”—it had struck me, when I first read it at age 18, as a celebration of childhood, an homage to the power of myth and the redemptive goodness of nature and animals.

Ann Goldstein's deft translation is an exception; it gives a clear sense of Morante's love of the romantic, while preserving a lightness of tone that prevents the lyrical prose from calcifying.
— Madeline Schwartz, New York Review of Books

This lovely new translation by Goldstein, known for her work on Elena Ferrante and Primo Levi, will hopefully go a long way toward re-establishing Morante's reputation among English-speaking readers. It's a magnificent novel, breathtaking in its psychological acuity. Arturo’s maturation—and accompanying disappointments, even betrayals—is deeply painful. ...But there are moments, too, of striking beauty.... The book is brimful with insight. By turns devastating and otherworldly, Morante's novel is a classic, and Goldstein's new translation should return to it the attention it deserves.
— Kirkus Reviews [starred review]

In this translation of Morante's arresting, febrile tale of abjection and adoration, originally published in 1957, Goldstein captures the blustery voice of an adolescent boy on Procida.... Morante's style is well-suited to the adolescent narrator who, marooned on an island, experiences particularly intense bouts of enchantment and disillusionment, making for a captivating novel.
— Publishers Weekly