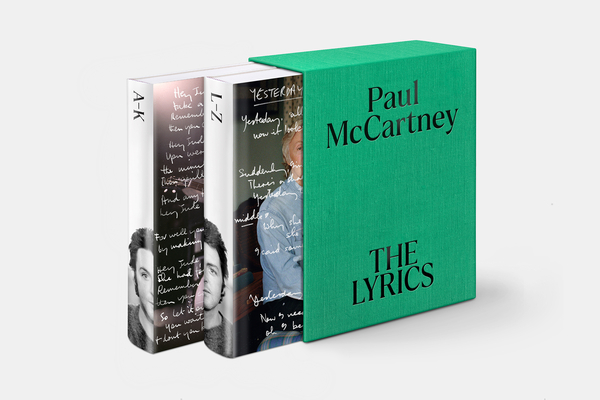 Excerpted in The New Yorker

A work of unparalleled candor and splendorous beauty, The Lyrics celebrates the creative life and the musical genius of Paul McCartney through 154 of his most meaningful songs.


From his early Liverpool days, through the historic decade of The Beatles, to Wings and his long solo career, The Lyrics pairs the definitive texts of 154 Paul McCartney songs with first-person commentaries on his life and music. Spanning two alphabetically arranged volumes, these commentaries reveal how the songs came to be and the people who inspired them: his devoted parents, Mary and Jim; his songwriting partner, John Lennon; his “Golden Earth Girl,” Linda Eastman; his wife, Nancy McCartney; and even Queen Elizabeth, among many others. Here are the origins of “Let It Be,” “Lovely Rita,” “Yesterday,” and “Mull of Kintyre,” as well as McCartney’s literary influences, including Shakespeare, Lewis Carroll, and Alan Durband, his high-school English teacher.

With images from McCartney’s personal archives—handwritten texts, paintings, and photographs, hundreds previously unseen—The Lyrics, spanning sixty-four years, becomes the definitive literary and visual record of one of the greatest songwriters of all time.

Born in Liverpool in 1942, Paul McCartney was raised in the city and educated at the Liverpool Institute. Since writing his first song at fourteen, McCartney has dreamed and dared to be different. He lives in England.

Paul Muldoon is the Pulitzer Prize–winning author of fourteen full-length collections of poetry, including Howdie-Skelp.
To read over the words to these 154 songs is to be impressed not merely with McCartney’s productivity but with the fertility of his imagination and the potency of his offhand, unfussy style.... The Lyrics makes clear that McCartney has written on a high level long past his Beatles years, and even the weakest lyrics in the books have a character all their own: a feeling of giddy playfulness and unguarded experimentation. They’re a joy to read because they exude the joy their maker took in their making.... Over and over, McCartney shows how deeply he is steeped in literary history and how much his output as a songwriter has in common with the works of the likes of Dickens and Shakespeare.

The Lyrics is a triumph. It is hugely readable, devoid of rock cliché, and full of fresh stories and opinions that even devoted fans won’t have encountered before. The pictures of McCartney and of handwritten lyrics, many of them never previously published, are worth the entry ticket on their own and the quality of the boxed product makes it a tactile pleasure and fun to possess.... The Lyrics is McCartney at his best.

Reading The Lyrics is like standing in a master chef’s kitchen as he prepares a dish, adding a dash of this and a spoonful of that and talking to us so winningly.... The Lyrics is able to cram in much more — show posters, set lists, handwritten notes, group photos both staged and casual.... There’s nothing like listening to Macca (as McCartney was known in his Liverpool days) talk about the rise of a band composed largely of working-class teens who changed the world forever.... Almost 60 years later, it’s still an amazing story.... Muldoon interviewed him for hours and coaxed out these charming commentaries.

Careening from decade to decade, and invoking John Lennon on the regular, it is likely the closest thing to a memoir McCartney will ever publish, with lyric sheets and a hefty number of unseen personal photos of his family and The Beatles.
— Kim Willis - USA Today

Indeed, The Lyrics easily represents the finest collection of illustrations associated with McCartney's life and work. And it's beautifully rendered, to boot. Drop-dead gorgeous as books go, The Lyrics rivals the finest art imprints.

With a gravity, reverence and sense of occasion that hasn't been seen since the Levites rolled out the Ark of the Covenant, the complete lyrics of Paul McCartney are published at last.
— John Walsh - Sunday Times

An unparalleled look at [McCartney's] creativity process... The breadth of his influences is astonishing.
— Jordan Runtagh - People