Whatever.: or how junior year became totally f$@cked (Hardcover) 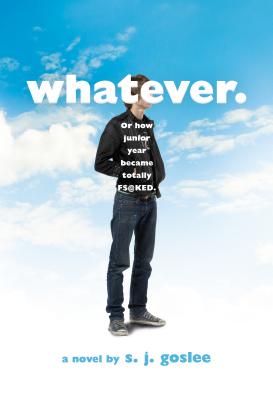 It's like the apocalypse came, only instead of nuclear bombs and zombies, Mike gets school participation, gay thoughts, and mother-effin' cheerleaders.

Junior year is about to start. Here's what Mike Tate knows:

His friends are awesome and their crappy garage band is a great excuse to drink cheap beer. Rook Wallace is the devil. The Lemonheads rock. And his girlfriend Lisa is the coolest. Then Lisa breaks up with him, which makes Mike only a little sad, because they'll stay friends and he never knew what to do with her boobs anyway. But when Mike finds out why Lisa dumped him, it blows his mind. And worse—he gets elected to homecoming court.

With a standout voice, a hilariously honest view on sex and sexuality, and enough f-bombs to make your mom blush, S.J. Goslee's debut YA novel Whatever. is a fresh, modern take on the coming-out story.

S.J. Goslee graduated from West Chester University with a BA in Literature and a minor in creative writing. She's been writing fanfiction in multiple fandoms for over a decade, amounting to over 140 stories and a million words. Whatever.is her debut novel. She lives in Glenolden, PA with her husband, two young sons, three cats and two dogs (one giant, one tiny).

“Goslee’s portrayal of this existential crisis is as humorous as it is grounding. All the feelings of disbelief and anxiety that one might expect are delivered in the way only a 16-year-old boy could articulate . . . Recommended for young adults who enjoy realistic fiction such as Bryan Lee O’Malley’s “Scott Pilgrim” series or books by John Green, Adam Silvera, or John Corey Whaley.” —School Library Journal, starred review

“Let’s face it, dudes and dudettes: Goslee’s debut is seriously cool . . . The author doesn’t make a single false step. Everything is just right: the tone, the style, the right-on dialogue, the characterization, the apposite amount of angsty drama, the pace of the genuinely sweet-spirited story. Fans of David Levithan’s Boy Meets Boy (2003) and Becky Albertalli’s Simon vs. the Homo Sapiens Agenda (2015) won’t be disappointed.” —Booklist, starred review

“Goslee’s Mike is a typical teenage boy, and she captures his voice effortlessly . . . This is a delightful story that many young people need to hear—that it is okay to be different and it is even better to be yourself.” —VOYA

“The third-person narrative moves quickly with plenty of realistic teen banter . . . A humorous account of a teen’s reluctant and awkward journey to acceptance of his emerging bisexuality.” —Kirkus Reviews


“Readers who are sorting through their own questions about their sexuality . . . may hear their heart’s echo in Mike’s conflicting, confusing, humiliating, exhilarating stew of emotional turmoil on the road to acceptance.” —The Bulletin