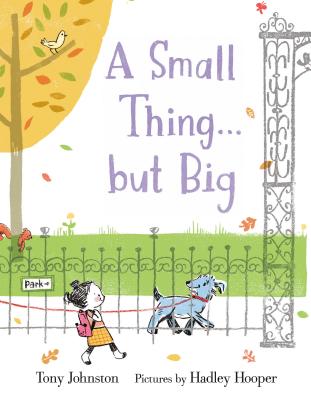 Lizzie and her mom go to the park. That's where Lizzie meets an elderly man and his companion, Cecile, a dog about her size.

But Lizzie is afraid of dogs, so she'll have to rely on her new friend to help her take things one step at a time.

Getting over your fears may seem like a small thing . . . but it sure can feel big.

Tony Johnston is the author of numerous books for children, including An Old Shell: Poems of the Galápagos. She lives in San Marino, California.

Hadley Hooper works as an editorial illustrator for numerous magazines and newspapers. In 2011 she illustrated Here Come the Girl Scouts! by Shana Corey. The Iridescence of Birds is her second picture book and first for Roaring Brook Press. She lives in Denver, Colorado.

"Johnston's economical text about conquering fears also focuses on finding the good in each dog and in the small actions of all. Hooper's charming illustrations make Lizzie's brave walk an absolute delight."—Kirkus Reviews, starred review

"A lovely story about a transformative connection that goes both ways, as well as the power of modest revelations—beautifully summed up in the book’s title, which is also a refrain in the text."—Publishers Weekly, starred review

"The light-toned palette of the relief-print illustrations allows the reader to find little Lizzie and active Cecile on each spread, and Hooper’s attention to detail encourages viewers to notice both the activities in the
foreground and the goings-on in the background."—The Horn Book