In Plain Sight: A Game (Hardcover) 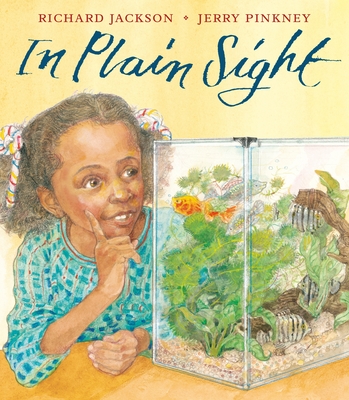 In Plain Sight: A Game (Hardcover)

Sophie lives with Mama and Daddy and Grandpa, who spends his days by the window. Every day after school, it's Grandpa whom Sophie runs to.

As Sophie and her grandpa talk, he asks her to find items he's "lost" throughout the day, guiding Sophie on a tour through his daily life and connecting their generations in this sweet, playful picture book from Richard Jackson, illustrated by Caldecott Medalist and Laura Ingalls Wilder Award winner Jerry Pinkney.

Richard Jackson, co-founder of Bradbury Press, Orchard Books, and DK Ink, has been an editor and publisher since 1962. He is the author of Have A Look, Says Book, illustrated by Kevin Hawkes, and lives in Towson, Maryland.

Jerry Pinkney (1939-2021) was the author and illustrator of more than one hundred books for young readers, including The Lion and the Mouse, for which he earned the Caldecott Medal. He also received five Caldecott Honors, six Coretta Scott King Illustrator Awards, four Coretta Scott King Illustrator Honors, five New York Times Best Illustrated Book awards, the Children’s Literature Legacy Award for Lifetime Achievement, an induction into the Society of Illustrators Hall of Fame, and an appointment to the National Council on the Arts by President George W. Bush in 2003.

"The best part of this collaboration between the longtime editor and the Caldecott Medalist is the playfulness that oozes from Jackson’s well-chosen words and the warmth of Pinkney’s artwork. There’s one thing that’s never missing from this gentle story about a special bond between the generations, and that’s the love Grandpa and Sophie have for each other."—Publishers Weekly, starred review

"A fabulous family story with something for the young and old alike."—Kirkus Reviews, starred review

"This appealing story about a dynamic intergenerational relationship is large enough to share with a group, but individual children will want to pore over the art to spot all of the details in plain sight."—School Library Journal, starred review

"This makes a good one-on-one read aloud for those not quite ready for Martin Handford’s Where’s Waldo? series."—Booklist