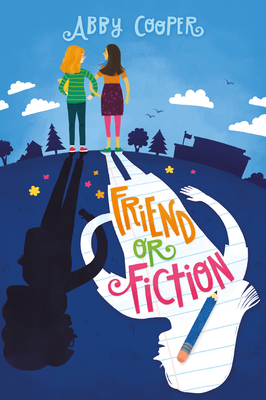 
Availability to be confirmed
One creative middle-schooler discovers that the best friend a girl can have is the one she makes herself in this charming magical realism read.

Jade's life hasn't exactly been normal lately, especially since her dad's cancer diagnosis. Jade wishes her family could leave their no-name town in Colorado already--everybody else does sooner rather than later, including every best friend Jade's ever had. So she makes one up. In the pages of her notebook, she writes all about Zoe--the most amazing best friend anyone could dream of.

But when pretend Zoe appears in real life thanks to a magical experiment gone right, Jade isn't so sure if she likes sharing her imaginary friend with the real world. To keep her best friend (and even make some new ones), Jade learns how to cope with jealousy, that friends should let friends be true to themselves, and that maybe the perfect best friend doesn't exist after all.
Previously a K-8 library media specialist, Abby Cooper is now a full time author of books for children. She has written two novels: Bubbles and Sticks and Stones.
A lonely girl creates her own best friend. No one stays in Tiveda, Colorado, for long. Friends come and go, and no one keeps in touch. Sick of making friends and losing them, aspiring author Jade Levy writes herself a best friend. Although Zoe exists solely on paper, she's real to Jade. She lives next door, they do everything together, and when Jade needs her, she gets out her beloved notebook and writes herself and Zoe into a story. Reality and fiction collide when an actual girl named Zoe moves in next door. Jade thinks she's dreaming; this can't be her Zoe. But everything about this girl mirrors Jade's creation. They look alike, and real Zoe's first day in Jade's sixth grade class unfolds exactly like the one Jade wrote for her. Jade finally has the real best friend she's longed for. But then Zoe deviates from the stories and starts thinking for herself, throwing Jade into a whirl of worry. What if Zoe finds another best friend? A subplot concerning Jade's father's cancer circles neatly around to meet the main narrative. Jade is introspective and narrates with quiet humor; anyone would be lucky to have her as a friend. Jade is white and Jewish, and Zoe has olive skin. An important secondary character is adopted and has two dads; another wears hijab. A solid, unusual story that speaks to the need for friendship.
—Kirkus Reviews

After Jade’s dad was diagnosed with cancer, her family canceled the plan to move away from their small Colorado town, and so Jade has been stuck there while the town gets smaller and her friends move away. In order to cope with the worry over her father’s illness, Jade turns to writing, and she ends up creating her own perfect friend in Zoe, a character who never leaves and does everything with Jade. When a classmate discovers magic in the town’s pond, however, he uses it to bring Zoe to life, and soon Jade discovers that it’s not always easy having a perfect best friend and that life is much more complicated than fiction. Her father’s illness and the surrounding drama are handled nicely as Jade’s family comes together and she realizes what she’s been missing out on by not being fully present. An endearing story, with a pitch-perfect tween voice and a touch of magic, about what makes a friend.
—Booklist

Jade is unhappy in the little Colorado town her family has ended up in, but they can’t move away because of her dad’s illness. Each new friend she makes soon moves away, so she now relies on writing about an imaginary best friend instead. One surprising day, her fictional best friend Zoe (described as having long dark hair and green eyes) comes to life. While Jade (default white) initially loves the control she has over Zoe’s actions and personality; eventually, she realizes what the readers may have known all along. Cooper’s writing engages readers, challenging them to decide whether Zoe is a hallucination, or a magical girl there to help Jade through a tough time.
—BayViews


In Jade’s Colorado town, people are always moving in and out. She’s had best friends and lost them, and she’s finally decided that the best way to keep a friend is to write one for herself. Zoe is everything she could ever want in a best friend, and their exploits are legendary—in Jade’s mind, at least. But when Zoe is brought to life by a quirky classmate and some magical pond water, Jade must deal with the day-to-day realities of having a formerly fictional best friend. At first, Zoe is content to be constantly guided by Jade. But is it real friendship when Zoe lacks agency? And is Jade neglecting other people in her life to devote all her time to perfecting her friendship with Zoe? Readers who also enjoy the craft of writing will find plenty to like here. Since Jade is an aspiring writer, there are plenty of writing tips, usually offered by Jade’s favorite teacher Mrs. Yang. VERDICT This contemplative fantasy has plenty of character development and touches of magical realism. Offer to fans of Kate Messner and Sarah Weeks.
—School Library Journal