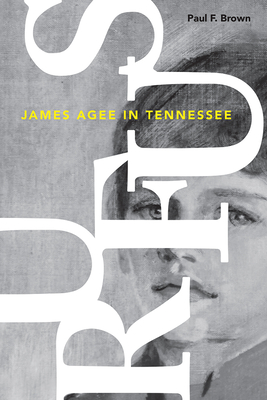 One of the most gifted of America’s writers, James Rufus Agee (1909–1955), spent a third of his short life in Tennessee, yet no biographical treatment until this one has so fully explored his roots in the state. In Rufus, Paul F. Brown draws deeply on a trove of journals, letters, interviews, and contemporaneous newspaper accounts, to produce a captivating portrait of Agee’s boyhood.

Brown meticulously delineates Agee’s family history, his earliest years as a sensitive child growing up in Knoxville’s Fort Sanders neighborhood, and the traumatic event that marked his sixth year: his father’s death in an automobile accident. Young Rufus—as his family always called him—revered his father and would use his memories of the tragedy to create his most enduring work of fiction, the Pulitzer Prize–winning A Death in the Family. Just a few years after his father was killed, Agee’s mother placed him in the St. Andrew’s School for Mountain Boys near Sewanee, Tennessee, where he would meet his mentor and lifelong friend, Father James Flye; these experiences would inspire Agee’s poignant novella, The Morning Watch. Another year in Knoxville followed, and then his mother, newly remarried, whisked him away to New England, where he would complete his education at Phillips Exeter Academy and Harvard.

Brown’s account deftly reconstructs various settings the young Agee encountered—including not only turn-of-the-century Knoxville and St. Andrew’s but also the mountain hamlet of LaFollette, his father’s hometown—and the complex family relationships that swirled around the young writer-to-be. Brown also explores Knoxville’s belated discovery of its famous son, initiated when Hollywood came to town in 1962 to film All the Way Home, an adaptation of A Death in the Family. Notable commemorations—including academic seminars, a public park, and a street named in Agee’s honor—would come later as the writer’s posthumous reputation bloomed. And now, with Rufus, we have the definitive account of how it all began.

Paul F. Brown teaches music at Coalfield School in Morgan County, Tennessee. As an independent researcher, he has published articles and lectured on James Agee at various forums and is a consultant for a forthcoming Agee documentary.