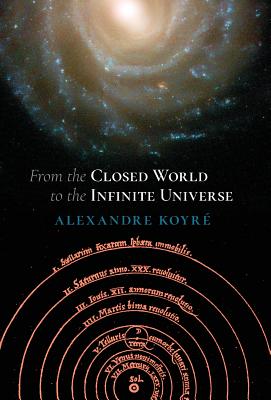 By Alexandre Koyre
Questions about availability for this title? Ask us here!
Usually Ships in 1-5 Days
This book cannot be returned

During the sixteenth and seventeenth centuries a radical change occurred in the patterns and framework of European thought. In the wake of Copernican theory and discoveries through the telescope, the notion of an ordered cosmos of "fixed stars" gave way to that of a universe infinite in both time and space-with significant and far-reaching consequences for human thought. Alexandre Koyr brilliantly interprets this revolution in terms of the change that occurred in our conception of the universe and our place in it, and illustrates the primacy of this change in the development of the modern world.

"An important contribution to the problem of the transition from the world view characteristic of the medieval centuries to that which rapidly gained acceptance after the seventeenth century." (Philosophical Quarterly)

"Koyr has provided the material and has illuminated it with uniformly perceptive and occasionally brilliant commentary.... An important contribution to the study of 17th-century thought." (Thomas S. Kuhn, Science)

"A model of scholarliness without pedantry, of clarity without oversimplification." (Arthur Koestler, Encounter)

"Surely a work that will be welcomed alike by the scientist, philosopher, and historian of ideas." (Philosophy and Phenomenological Research)

Alexandre Koyr was a member of the Institute for Advanced Study, Princeton, and professor at the Ecole Pratique des Hautes Etudes in Paris. His books include Discovering Plato and Newtonian Studies.