The World We Need: Stories and Lessons from America's Unsung Environmental Movement (Paperback) 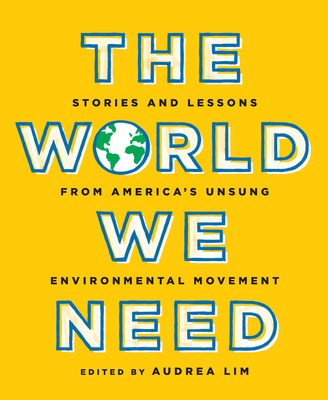 The World We Need: Stories and Lessons from America's Unsung Environmental Movement (Paperback)

As the world's scientists have come together and declared a climate emergency, the fight to protect our planet's ecological resources and the people that depend on them is more urgent than ever. But the real battles for our future are taking place far from the headlines and international conferences, in mostly forgotten American communities where the brutal realities of industrial pollution and environmental degradation have long been playing out.

The World We Need provides a vivid introduction to America's largely unsung grassroots environmental groups--often led by activists of color and the poor--valiantly fighting back in America's so-called sacrifice zones against industries poisoning our skies and waterways and heating our planet. Through original reporting, profiles, artwork, and interviews, we learn how these activist groups, almost always working on shoestring budgets, are devising creative new tactics; building sustainable projects to transform local economies; and organizing people long overlooked by the environmental movement--changing its face along the way.

Capturing the riveting stories and hard-won strategies from a broad cross section of pivotal environmental actions--from Standing Rock to Puerto Rico--The World We Need offers a powerful new model for the larger environmental movement, and inspiration for concerned citizens everywhere.

Audrea Lim is a Brooklyn-based journalist who has written for the New Yorker, Rolling Stone, the New Republic, and The Nation.