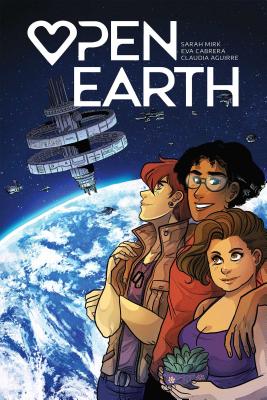 
On Our Shelves Now
"It’s fun, sexy, and inclusive." - BookRiot.com

Rigo is a young woman of her time: specifically, the time just after the collapse of Earth. After living her whole life on a small space station orbiting the planet, the cultural norms and rules of her Californian parents are just history to her. In between work shifts at the station air farm, Rigo explores her own desires, developing openly polyamorous relationships with her friends and crewmates. When she starts to feel one of those relationships change, however, Rigo must balance her new feelings with the stability of her other relationships, as well as the hard-earned camaraderie of a small crew floating in the vastness of space. But, as the ship motto goes, "Honesty keeps us alive."
Sarah Mirk is the author of the modern relationship guidebook Sex from Scratch: Making Your Own Relationship Rules and is the former online editor of feminism and pop culture nonprofit Bitch Media. She's now a contributing editor at graphic journalism site The Nib, where she writes nonfiction comics about everything from mansplaining to monogamy.

Eva Cabrera is a latina traveler and the comic book artist of Open Earth from Oni Press, Betty & Veronica: Vixens from Archie Comics, and the Eisner-nominated comic KIM & KIM from Black Mask Studio. Vegan and lover of video games and animals. She's worked with Capstone, dedicated to juvenile literature, illustrating the books Romeo and Juliet, Robinson Crusoe and The Three Musketeers. She's done covers for the Adventure Time and Bravest Warriors comics, from the licenses of Cartoon Network, and Lumberjanes for BOOM Studios!. She founded the Boudika Comics studio along with Claudia Aguirre where she published her own graphic novels, presenting them at national and international events such as Comic-Con in San Diego, Alternative Press Expo in San Francisco, and Guadalajara International Book Fair, among others. https://www.behance.net/evacabrera https://www.instagram.com/evacabrera https://www.facebook.com/Evacabrera.Art

"Humans may be living in space now, but our same old problems with love, sex, and communication are timeless. Full of family, friendship, and love, Cabrera, Aguirre, and Mirk's vision of the post-apocalypse looks pretty damn appealing to me."
— Erika Moen (Oh Joy Sex Toy)

“The future of Open Earth is a loving and passionate one, where the new generation of space-borns are discarding tradition and forming healthy, non-monogamous relationships. Come for the earnest characters and inviting art; stay for the zero-G space sex!"
— Hazel Newlevant (Chainmail Bikini, Sugar Town)