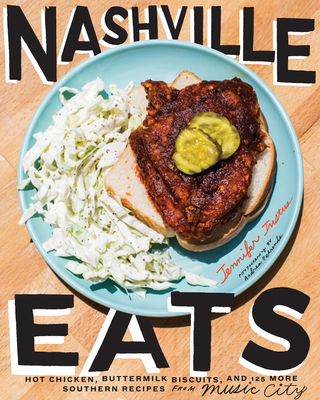 
On Our Shelves Now
If it seems like Nashville is everywhere these days—that’s because it is. GQ recently declared it “Nowville,” and it has become the music hotspot for both country and rock. But as hot as the music scene is, the food scene is even hotter.

In Nashville Eats, more than 100 mouthwatering recipes reveal why food lovers are headed South for Nashville’s hot chicken, buttermilk biscuits, pulled pork sandwiches, cornmeal-crusted catfish, chowchow, fried green tomatoes, and chess pie. Author Jennifer Justus whips up the classics—such as pimento cheese and fried chicken—but also includes dishes with a twist on traditional Southern fare—such as Curried Black Chickpeas or Catfish Tacos. And alongside the recipes, Jennifer shares her stories of Nashville—the people, music, history, and food that make it so special.
Jennifer Justus, the former culture reporter at the Tennessean and author of The Food Lovers’ Guide to Nashville, is an expert on Southern food. Her work has appeared in Southern Living, Cornbread Nation: The Best of Southern Food Writing, Imbibe, and more. Justus blogs at a nasty bite, an expression her grandmother used to describe a simple meal.
“Nashville Eats perfectly captures the spirit of Music City. It’s an incredible collection of recipes that makes you want to spend as much time as possible in Nashville.”
— Sean Brock, chef and author of Heritage

"I wouldn't dream of going out to eat in Nashville without consulting Jennifer Justus first. The lady knows from tasty and I know I won't waste a single bite on her watch. Problem is, I don't get down there nearly as often as I'd like, so Nashville Eats is a blessing. In it, she's bringing home the flavor of the city she loves, and the stories behind the recipes are just as satisfying as the dishes they produce."
— Kat Kinsman, editor in chief of "Tasting Table"

"A love letter to the working class cooking of Nashville, a crack at codifying the foodways of middle Tennessee, an homage to fabled locals like hot chicken queen Andre Prince Jeffries, a roster of recipes that includes a Kitty Wells-inspired orange and coconut cake: Nashville Eats by Jennifer Justus is a well-honed cultural passkey to one of America’s great culinary cities."
— John T. Edge, coeditor, Southern Foodways Alliance Community Cookbook