The Unfinished Life of Addison Stone: A Novel (Paperback) 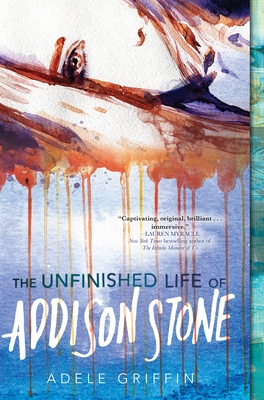 For fans of Miss Peregrine's Home for Peculiar Children, Girl, Interrupted, and A.S. King, National Book Award-finalist Adele Griffin tells the fully illustrated story of a brilliant young artist, her mysterious death, and the fandom that won't let her go.

From the moment she stepped foot in NYC, Addison Stone’s subversive street art made her someone to watch, and her violent drowning left her fans and critics craving to know more. I conducted interviews with those who knew her best—including close friends, family, teachers, mentors, art dealers, boyfriends, and critics—and retraced the tumultuous path of Addison's life. I hope I can shed new light on what really happened the night of July 28.
—Adele Griffin

Adele Griffin is a two-time National Book Award finalist and the highly acclaimed author of Loud Awake and Lost, as well as numerous other books for young adult and middle grade readers. Adele lives with her husband, Erich, and their two young children in Brooklyn, New York.

"[An] intricate, intoxicating novel . . . This compelling story can be read on many levels, from a multi-voiced meditation on a brief, bright life in the Big Apple to an exploration of the biographer’s almost impossible task: the discovery and distillation of another’s complex self."
—The Washington Post

"Written like a longform piece of journalism . . . A gripping read with a seriously ominous ending . . . One of the most unique books I’ve ever read."
—The Guardian

"An acute examination of a young woman’s troubled mind as much as it’s a mystery . . . that she remains an enigma, even at the fascinating novel’s end, somehow makes Addison’s death all the more harrowing."
—The Boston Globe

"A layered homage to the tortured painter, but also an exercise in structure and discipline, complete with pictures, paintings, media clips and more."
—Parade.com

"Addictive . . . Despite all of the photos and paintings and interviews, Stone remains an enigma . . . As characters debate the true nature of Addison Stone, they reveal just how little they know each other and themselves, and how much they project their own beliefs, fears, and hopes onto the world."
—The Daily Beast

"Photographs, interviews and articles tell the story of a girl caught up in the glamorous society art scene of Manhattan, spinning out of control . . . Brilliant and unforgettable."
—Justine Magazine

"Here’s the thing I love about Addison Stone: she could so easily have become a manic pixie dream girl, but she didn’t . . . The Addison that emerges from [the interviews in the book] had both sides of creative genius—the gifts and all it took to feed them."
—Melissa Albert for BN.com

"Resembles an in-depth article one might read in The New Yorker . . . A compelling fictional biography."
—Shelf Awareness, Starred Review

"This book has the best of both genres: a gripping mystery and a fascinating biography."
—Chico Enterprise Record

"A compelling look at the dark underbelly of the Manic Pixie Dream Girl fantasy, an exploration of the way a magnetic personality can imbalance relationships, a portrait of an artist whose talent comes from the part of her that endangers her . . . There’s no shortage of romance in the portrayal of Addison, the brilliant beauty who captured all eyes and whose ghost still powers imaginations, but perceptive readers will see beyond the glamour to the simmering dysfunction."
—The Bulletin of the Center for Children's Books

"Griffin's mixed media approach is fresh and welcome; art and photographs dot the pages of a compelling biography."
—Romantic Times

"Griffin presents readers with overlapping perspectives on Addison’s frenetic life of gallery openings, parties and performance art, and the doubt and self-destructive tendencies lurking beneath her fierce creativity . . . Multifaceted and thoroughly postmodern."
—BookPage

"A fast-paced, engaging read. Tormented by mental illness or possibly the supernatural, Addison is an unpredictable and compelling central figure."
—VOYA

"A thorough, multi-faceted picture of this one-of-a-kind girl, who was simultaneously sensitive and wild, selfish and loving, eclectic and vulnerable. I’d recommend it, wholly."
—TeenReads

"An intimate and cohesive portrait of a complex girl . . . The whirlwind pace will have readers in its grip."
—Horn Book Magazine

"Captivating, original, brilliant, and so dangerously exhilarating that you'll find yourself addicted to the entire immersive experience. You will fly through this thriller, incapable of putting it down."
—Lauren Myracle, New York Times bestselling author of The Infinite Moment of Us

"Only a writer as fierce and imaginative as Adele Griffin could bring us the real story of Addison Stone, a true talent and a bona fide star."
—Daniel Handler, New York Times bestselling author of Why We Broke Up

"A beautifully executed and riveting novel from an extraordinarily talented writer. Addison Stone will haunt you. Hers is a story you do not want to miss."
—Courtney Summers, author of the Cybil-award winner Cracked Up to Be

"Compelling and tragic from the very first page . . . [the interspersed media layers] level upon level of reality to the story. Readers will be fascinated with the novel and caught up in the drama right up to the end."
—School Library Journal, Starred Review

“Griffin, a two-time National Book Award finalist and one of the best YA authors around, attempts something very different here: a Rashomon-like take on a young girl’s life, highlighted by photos of the girl and her art, all in an attempt to put the unknowable Addison more within the reader’s grasp . . . A terrific experiment, something fresh and hard to put down. It gives a sense of both the artistic temperament and the nature of madness—and the sometimes thin line in between.”
—Booklist, Starred Review

“Snippets of interviews sprinkled with color photographs and paintings form a portrait of a sassy and troubled young woman . . . [an] indictment of the shallowness of contemporary cultural life.”
—Kirkus Reviews

"A faux biography of a deceased teenage rising star in the art world, [built] around interviews from people involved in Addison’s life before she died, excerpts from media coverage of her rapidly growing fame, photographs of Addison and her friends, and images of her artwork . . . Griffin offers incisive commentary on mental illness and the frenzy around (and pressures induced by) celebrity, especially surrounding young women. Defined primarily by the contradictory accounts of those around her, Addison remains something of a cipher even by book’s end."
—Publishers Weekly

"As readers learn more about Addison’s life, struggles, and the night she died, they will be pulled in by her story and be left with the sense that maybe the biggest question isn’t what happened the night Addison died . . . but who Addison really was. A moving story of art, fame, and tragedy."
—Mystery Scene

"Adele Griffin takes the concept of epistolary fiction and turns it upside down . . . a unique and captivating fictional documentary. The strong cautionary message about mental health, medication, and obsession is quite powerful. I can't recommend The Unfinished Life of Addison Stone highly enough!"
—Fresh Fiction

"Even though we all know how this story turns out from the first page (a newspaper article about Addison’s death kicks off the story), that doesn’t make the book any less of a page-turner.... The Unfinished Life of Addison Stone is a perfect mystery."
—Hello Giggles

"Addison Stone is legendary . . . Who are these people to tell us who Addison is? What do their concepts of her as a person—and her as an artist—do to render a full person? Can they? What of their biases and connections with and to her do to getting at the heart of who she was? . . . Griffin's novel is experimental but exceptionally successful at being so."
—Stacked Books