All the Wind in the World (Hardcover) 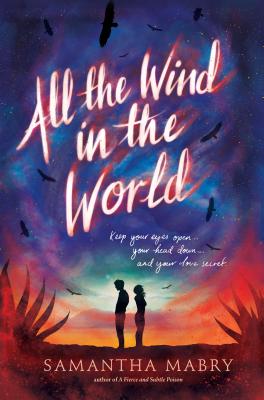 All the Wind in the World (Hardcover)

Sarah Jac Crow and James Holt have fallen in love working in the endless fields that span a bone-dry Southwest in the near future—a land that’s a little bit magical, deeply dangerous, and bursting with secrets. To protect themselves, they’ve learned to work hard and, above all, keep their love hidden from the people who might use it against them. Then, just when Sarah Jac and James have settled in and begun saving money for the home they dream of near the coast, a horrible accident sends them on the run. With no choice but to start over on a new, possibly cursed ranch, the delicate balance of their lives begins to give way—and they may have to pay a frighteningly high price for their love.

All the Wind in the World is a breathtaking tale of dread and danger, romance and redemption.
Samantha Mabry credits her tendency toward magical thinking to her Grandmother Garcia, who would wash money in the kitchen sink to rinse off any bad spirits. She teaches writing and Latino literature at a community college in Dallas, where she lives with her husband, a historian, and a cat named Mouse. She is the author of A Fierce and Subtle Poison and All the Wind in the World. Visit her online at samanthamabry.com or on Twitter: @samanthamabry.
Longlisted for the National Book Award for Young People’s Literature
Bulletin of the Center for Children’s Books’ 2017 Blue Ribbons List Winner

“In aching, luminous prose, Mabry crafts a story impossible to forget, infused with southwestern folklore and magical realism . . . A gripping, fable-like story of a love ferocious enough to destroy and a world prepared to burn with it.”
—Booklist, starred review

“The grit and dust can almost be felt on the pages through Mabry’s evocative, searing prose; the increasing humiliation of the fieldhands and their hopelessness makes the tension nearly suffocating, and Old Testament allusions give the book a further sense of doom.”
—Bulletin for the Center of Children’s Books, starred review

“Walks dark and dances romantic . . . Mabry’s pairing of natural environment and magic realism is striking and effective.”
—The Center for Fiction: Junior Edition

“Mabry has established herself as a master of fabulist sleight of hand, and this sophomore effort won’t disappoint.”
—BN Teen

“A vein of superstition courses through the tale, cut with stark realities, raw descriptions, and plenty of grit.”
—Publishers Weekly

“The author’s prose is rich and lyrical.”
—Kirkus Reviews

“Mabry's lyrical writing sizzles with the same heat as the relentless desert sun. The setting of All the Wind in the World is refreshingly unique, but the main character’s feelings of love and longing are universal. Remarkable.”
—April Genevieve Tucholke, author of Wink Poppy Midnight