The Poison Machine (A Hunt and Hooke Novel #2) (Hardcover) 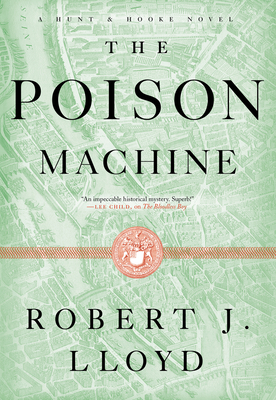 The Poison Machine (A Hunt and Hooke Novel #2) (Hardcover)

This is book number 2 in the A Hunt and Hooke Novel series.

This is a really fun thriller set in 17th century London and Paris. While it is a sequel, it can be enjoyed as a stand-alone. Fans of Ken Follett will love the setting and detail, and Michael Connelly readers will adore the protagonist and the swiftly moving plot.

— Sissy
"Lloyd once again infuses his world with the sights, sounds, and smells of the late 17th century...for what’s bound to be one of the best historical novels of the year." — CrimeReads

In a thrilling sequel to The Bloodless Boy —a New York Times Best New Historical Novel of 2021 — combining the color and adventure of Alexandre Dumas and the thrills of Frederick Forsyth — early scientists Harry Hunt and Robert Hooke of the Royal Society stumble on a plot to kill the Queen of England . . .

London, 1679 — A year has passed since the sensational attempt to murder King Charles II, but London is still a viper’s nest of rumored Catholic conspiracies, and of plots against them in turn. When Harry Hunt — estranged from his mentor Robert Hooke — is summoned to the remote and windswept marshes of Norfolk, he is at first relieved to get away from the place.

But in Norfolk, he finds that some Royal workers shoring up a riverbank have made a grim discovery — the skeleton of a dwarf. Harry is able to confirm that the skeleton is that of Captain Jeffrey Hudson, a prominent member of the court once famously given to the Queen in a pie. Except no one knew Hudson was dead, because another man had been impersonating him.

The hunt for the impersonator, clearly working as a spy, will take Harry to Paris, another city bedeviled by conspiracies and intrigues, and back, with encounters along the way with a flying man and a cross-dressing swordswoman — and to the uncovering of a plot to kill the Queen and all the Catholic members of her court. But where? When?

The Poison Machine is a nail-biting and brilliantly imagined historical thriller that will delight readers of its critically acclaimed predecessor, The Bloodless Boy.
Robert Lloyd, the son of parents who worked in the British Foreign Office, grew up in South London, Innsbruck, and Kinshasa. He studied for a Fine Art degree, starting as a landscape painter, but it was while studying for his MA degree in The History of Ideas that he first read Robert Hooke's diary, detailing the life and experiments of this extraordinary man. After a 20-year career as a secondary school teacher, he has now returned to painting and writing. He is the author of The Bloodless Boy, which was selected by Publishers Weekly as a Mystery Book of the Year and The New York Times as a Best New Historical Novel of 2021.
"Lloyd once again infuses his world with the sights, sounds, and smells of the late 17th century...for what’s bound to be one of the best historical novels of the year." — CrimeReads


Praise for the previous book in the Hook & Hunt series, The Bloodless Boy . . .

"Lloyd's stunning debut and series launch makes the complex politics of the time feel immediate while integrating them into an engrossing whodunit." — Publishers Weekly, Starred Review