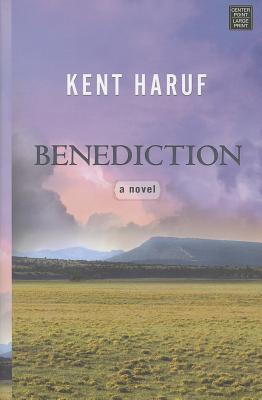 By Kent Haruf
$36.95
Availability to be confirmed

“Any new novel by Haruf is cause for celebration, but for those of us who have been waiting patiently to reconnect with the Front Range of Colorado and its quirky inhabitants since reading Plainsong and Eventide, Benediction is the answer to our literary prayers. The main character is dying, but that doesn't set a tone of great remorse or regret for a life in its last stages on Earth. Instead, it becomes a reflection of a family, of the place where they live, of the forces that formed them and made them into the strange, angry, resourceful, and engaging people who they have become. Haruf is a wonderful writer, and I can't wait to celebrate the publication of this book with him and with our customers.”
— Gayle Shanks, Changing Hands Bookstore, Tempe, AZ

Kent Haruf's honors include a Whiting Foundation Writers' Award, the Mountains & Plains Booksellers Award, the Wallace Stegner Award, and a special citation from the PEN/Hemingway Foundation; he has also been a finalist for the National Book Award, the Los Angeles Times Book Prize, and the New Yorker Book Award. He lives with his wife, Cathy, in their native Colorado.