The Great American Sports Page: A Century of Classic Columns from Ring Lardner to Sally Jenkins: A Library of America Special Publication (Hardcover) 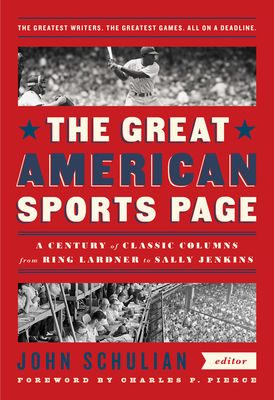 A first-of-its-kind celebration of the newspaper scribes who made sportswriting a glorious popular art, and immortalized America's greatest games and athletes

Spanning nearly a century, The Great American Sports Page presents essential columns from more than three dozen masters of the press-box craft. These unforgettable dispatches from World Series, Super Bowls, and title bouts for the ages were written on deadline with passion, spontaneity, humor, and a gift for the memorable phrase. Read avidly day in and day out by a sports-mad public, these columnists became journalistic celebrities in their home cities, their coverage trusted and savored, their opinions hotly debated. Some even helped change the games they wrote about. Gathered here in a groundbreaking anthology, their writings capture some of sport's most enduring moments and many of its all-time greats: Babe Ruth, Jackie Robinson, Muhammad Ali, and Michael Jordan among them. But the best American sportswriters also found ways to write powerfully about lesser-known athletes and to convey, often with heartbreaking honesty and insight, the less glamorous and more tragic facets of the games we love. In its survey of the finest American sportswriting from Ring Lardner to Thomas Boswell, from Red Smith and Jimmy Cannon to Bob Ryan and Michael Wilbon, The Great American Sports Page takes the measure of the human richness, complexity, and competitive spirit of sports and the athletes who continue to fascinate and inspire us.

John Schulian was a sports columnist for the Chicago Sun-Times and Philadelphia Daily News before moving to Hollywood, where he was, among other things, the co-creator of Xena: Warrior Princess. In 2016 he was awarded the PEN/ESPN Lifetime Achievement Award for Literary Sports Writing. He is the editor of the Library of America anthologies Football: Great Writing about the National Sport and, with George Kimball, At the Fights: American Writers on Boxing. He is the author of Sometimes They Even Shook Your Hand: Portraits of Champions Who Walked Among Us and, most recently, the novel A Better Goodbye.

Charles P. Pierce (b. 1953) has written about sports and politics for numerous publications, including Esquire, Grantland, The New York Times, the Los Angeles Times, the Boston Globe, and Sports Illustrated. He is the author of Sports Guy (200) and Moving the Chains: Tom Brady and the Pursuit of Everything (2006).

"To read the book is to be astonished, again and again, by the ingenuity and flair of the writers who thrived in this medium. Stories written in two hours for the next day’s newspaper shouldn’t hold up decades later, but the best work here is indelible, even when it describes the heroism of long-forgotten racehorses and prizefighters." — John Swansburg, The New York Times Book Review

"Thrilling. . . . The surprise and delight of The Great American Sports Page, John Schulian’s selections from a century’s worth of newspaper columns about baseball, boxing, football, gymnastics, and (in one case) swimming the English Channel, is how often it happens—how often the writers connect, how often the prose approaches the condition of flat-out poetry."  —James Parker, The Atlantic

“The entries from the first 50 or 60 years exhibit the boisterous hyperbole, epic mood, circumlocution, simile and metaphor that once made sports writing a sport in itself. . . . This is the kind of book that makes you a social nuisance and sleeve plucker, a persistent spouter of quotation: Just one more, you keep saying.”  — Katherine A. Powers, The Wall Street Journal

"Outstanding, powerful and poetic. . . .  Most of the work in the book was written under intense deadline pressure — no time for primping and polishing — which makes the power of the prose all the more remarkable." — Rick Kogan, The Chicago Tribune

"Who better than John Schulian--columnist, novelist, critic, screenwriter, and the recipient of the PEN ESPN Lifetime Achievement Award for Literary Sports Writing--to appreciate great sportswriters? Going back to the early twentieth century, The Great American Sports Page gives us the sportswriters who had no greater aspiration than to write the best they could about something they loved and valued in the columns of their daily newspapers. An unforgettable line-up of heavy-hitting writers delivers a collection that deserves a standing ovation from sports fans." --Pat Jordan, sportswriter and author of A False Spring