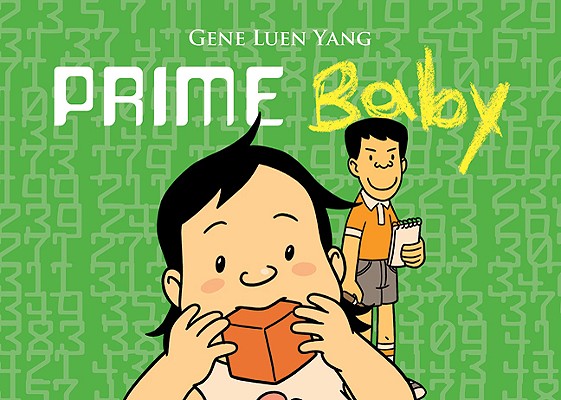 From the pages of the New York Times and the pen of Printz Award winner Gene Luen Yang comes a tale of math, aliens, and new siblings.

Thaddeus doesn't like his new sister (she's not that smart-- and she gets all the attention). He likes her even less when he discovers that she's an inter-dimensional conduit for peace-loving aliens (who are totally lame--all they want to do is knit socks for the homeless and have sing-a-longs ). But what's even worse is that no one will believe him about any of this How is he ever going manage to grow up to become the President of Earth?

Gene Luen Yang began drawing comic books in the fifth grade. In 1997, he received the Xeric Grant, a prestigious comics industry grant, for "Gordon Yamamoto" and the "King of the Geeks," his first comics work. He has since written and drawn a number of titles, including "Duncan's Kingdom" (with art by Derek Kirk Kim), "The Rosary Comic Book," and "Animal Crackers." American "Born Chinese," his first graphic novel from First Second, was a National Book Award finalist, as well as the winner of the Printz Award and an Eisner Award. He also won an Eisner for "The Eternal Smile," a collaboration with Derek Kirk Kim. Yang lives in the San Francisco Bay Area, where he teaches high school.

Eight-year-old Thaddeus Fong is insanely jealous of his baby sister and exploits his intelligence as a weapon against his social insecurities. Politics ranging from those of the family to those of state are explored and sent up as Yang unfolds a rich and spirited story that lays bare psychological and social truths, a parable in which ever-forgiving space aliens play a major role in advancing not just the plot but also character development. Using the flat, cartoon style of his award-winning American Born Chinese (2006), Yang pulls us in from the first page and packs in several surprises as well as clever asides within its 55, multi-paneled, single-strip pages, allowing plenty of white space to force readers to note the finest details of the action in counterpoint to Thaddeus’ attempts to interpret every interaction as a personal slight. The color palette employed is soft, subtly contradicting Thaddeus’ emphatic evil-versus-good outlook with its relative gentleness. Sf readers who value humor and humanity (not just slam-bang action), Christians, newcomers to graphic novels, and fans of Yang’s simultaneously childlike and sophisticated ability to create and maintain tension should all be satisfied by his new book. —Francisca Goldsmith