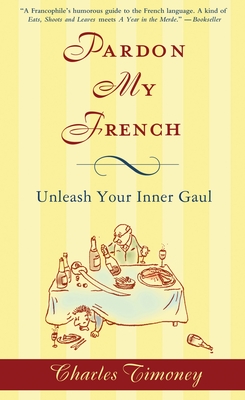 By Charles Timoney
$15.00
Availability to be confirmed

From getting the best value from the boulangerie to ordering a steak without getting sneered at, an A-to-Z guide to fitting in en Français

Englishman Charles Timoney was thrown into French life headfirst twenty-five years ago when he and his wife moved to her native France. He had studied French in school, but his memory of vocabulary lists and conjugation drills proved no match for day-to-day living. As he blundered his way toward fluency, he kept a list of words and phrases that wonderfully (sometimes wickedly) epitomized aspects of the French culture-and were used only by native speakers.

Pardon My French tackles the delightful absurdities of French life and language and steers readers past the potential embarrassments of speaking French in France. It is a book no student, traveler, or language maven should be without.

When Charles Timoney and his French wife both lost their jobs in the same week, they decided to try living in France for a year or so. It proved much harder than expected. Charles's O level in French was little help when everyone around him consistently used a wide variety of impenetrable slang and persisted in the annoying habit of talking about things he had never heard of. But they stayed. Two decades and two thoroughly French children later, he has written three books on his experience of France, the French people, and the French language: Pardon My French, A Certain Je Ne Sais Quoi, and An Englishman Aboard.

"Coming to France? Forget the rest, read the best. This book will save you from being the butt of the Frenchman's humour."
-French News

"A Francophile's humorous guide to the French language. A kind of Eats, Shoots and Leaves meets A Year in the Merde."
-Bookseller