Mommy Man: How I Went from Mild-Mannered Geek to Gay Superdad (Hardcover) 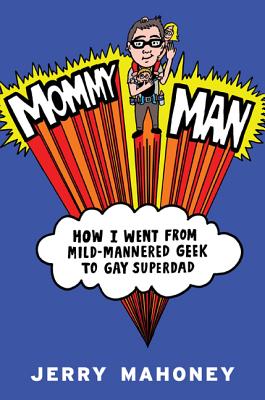 Mommy Man: How I Went from Mild-Mannered Geek to Gay Superdad (Hardcover)


Availability to be confirmed
As a teenager growing up in the 1980s, all Jerry Mahoney wanted was a nice, normal sham marriage: 2.5 kids and a frustrated, dissatisfied wife living in denial of her husband's sexuality. Hey, why not? It seemed much more attainable and fulfilling than the alternative--coming out of the closet and making peace with the fact that he'd never have a family at all. Twenty years later, Jerry is living with his long-term boyfriend, Drew, and they're ready to take the plunge into parenthood. But how? Adoption? Foster parenting? Kidnapping? What they want most of all is a great story to tell their future kid about where he or she came from. Their search leads them to gestational surrogacy, a road less traveled where they'll be borrowing a stranger's ladyparts for nine months. Thus begins Jerry and Drew's hilarious and unexpected journey to daddyhood. From then on, they're in uncharted waters. They're forced to face down homophobic baby store clerks, a hospital that doesn't know what to do with them, even members of their own family who think what they're doing is a little nutty. One thing's for sure. If this all works out, they're going to have an incredible birth story to tell their kid. With honesty, emotion, and laugh-out-loud humor, Jerry Mahoney ponders what it means to become a Mommy Man . . . and discovers that the answer is as varied and beautiful as the concept of family itself.
Jerry Mahoney is an award-winning comedy writer whose work has appeared in the New York Times and Westchester Magazine and on the Lifetime Moms website. He's the author of the popular parenting blog Mommy Man: Adventures of a Gay Superdad, which was named one of the Top 10 Humor Blogs by Babble.com. He lives in New Rochelle, New York with his husband, Drew, and . . . well, the rest is quite a story.