Uncharitable: How Restraints on Nonprofits Undermine Their Potential (Paperback) 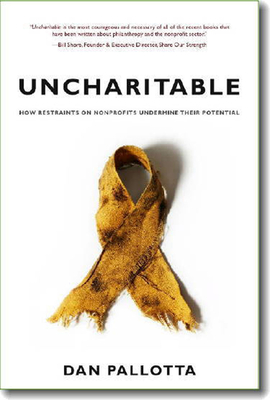 Uncharitable: How Restraints on Nonprofits Undermine Their Potential (Paperback)

Uncharitable goes where no other book on the nonprofit sector has dared to tread. Where other texts suggest ways to optimize performance inside the existing paradigm, Uncharitable suggests that the paradigm itself is the problem and calls into question our fundamental canons about charity. Author Dan Pallotta argues that society’s nonprofit ethic acts as a strict regulatory mechanism on the natural economic law. It creates an economic apartheid that denies the nonprofit sector critical tools and permissions that the for-profit sector is allowed to use without restraint (e.g., no risk-reward incentives, no profit, counterproductive limits on compensation, and moral objections to the use of donated dollars for anything other than program expenditures). These double-standards place the nonprofit sector at extreme disadvantage to the for profit sector on every level. While the for profit sector is permitted to use all the tools of capitalism to advance the sale of consumer goods, the nonprofit sector is prohibited from using any of them to fight hunger or disease. Capitalism is blamed for creating the inequities in our society, but charity is prohibited from using the tools of capitalism to rectify them. Ironically, this is all done in the name of charity, but it is a charity whose principal benefit flows to the for-profit sector and one that denies the nonprofit sector the tools and incentives that have built virtually everything of value in society. The very ethic we have cherished as the hallmark of our compassion is in fact what undermines it. This irrational system, Pallotta explains, has its roots in 400-year-old Puritan ethics that banished self-interest from the realm of charity. The ideology is policed today by watchdog agencies and the use of “efficiency” measures, which Pallotta argues are flawed, unjust, and should be abandoned. By declaring our independence from these obsolete ideas, Pallotta theorizes, we can dramatically accelerate progress on the most urgent social issues of our time. Pallotta has written an important, provocative, timely, and accessible book—a manifesto about equal economic rights for charity. Its greatest contribution may be to awaken society to the fact that they were so unequal in the first place.
DAN PALLOTTA founded Pallotta Team-Works, the company that invented the AIDS Rides and Breast Cancer 3-Day events, which raised over half a billion dollars and netted $305 million in nine years—more money, raised more quickly for these causes than any known private event operation in history. 182,000 people participated in the events. The company had more than 350 full-time employees in sixteen U.S. offices, was the subject of a Harvard Business School case study, and fundamentally re-invented the paradigm for special event fundraising in America.