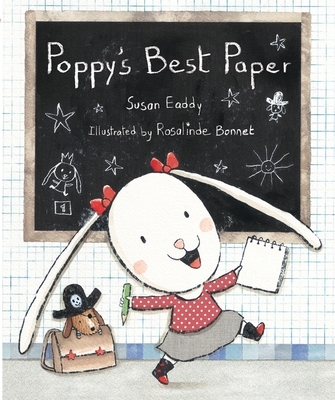 
On Our Shelves Now
Fans of Olivia and Lilly will delight in Poppy, a little rabbit with big dreams—and an even bigger personality.

More than anything, Poppy wants to be a verrrry famous writer. She's sure Mrs. Rose will pick her paper to read to the whole class! Trouble is, she has tall ambitions but is short on effort, and her jealousy takes over when her best friend's paper is chosen instead. In the end, Poppy discovers that she has to get out of her own way if her big dreams are going to come true.

Rosalinde's adorable, expressive illustrations make memorable, quirky Poppy a real star!
When her mother framed the rooster she drew in kindergarten, Susan Eaddy decided she wanted to be a verrrry famous artist when she grew up. She now sculpts clay into illustrations for magazines and children's books, including My Love for You Is the Sun (Little Bahalia) and Papa Fish's Lullaby (Cooper Square). Poppy's Best Paper is the first book she has written.

When Rosalinde Bonnet was little, she couldn't decide if she wanted to be an artist, an illustrator, or a zoologist. Now she writes and illustrates children's books that often feature animals—like Poppy! She is the illustrator of The Art Collector and The Little Red Elf, and the author and illustrator of several picture books available in France, Belgium, and the United Kingdom.
Following her decision to become a writer when she grows up, Poppy takes a significant step in the right direction—after a few false starts. Poppy is blithely positive that the perfunctory career declaration she's produced for a writing assignment will be selected for a class read-aloud. She is therefore deeply miffed when her methodical friend Lavender's "Why I Want to Be a Brain Surgeon" is chosen instead. When, next time, Lavender's "My Wish for World Peace" gets the nod over Poppy's shallow, self-absorbed effort, her fury is so open that she lands a stint in the Chill-Out Chair. Third time's the charm though, as for the assigned topic "How to Do Something," a repentant Poppy tallies up her own rude behavior in a paper titled "How to Get in Trouble." This ingenious apology not only earns applause from the class, but mends fences with Lavender too. Poppy, a flop-eared bunny, leads a cast of small, individualized animals drawn with an expressive delicacy reminiscent of Kevin Henkes' figures. Also, along with sly notes like Poppy's bright visions of future school visits and celebrity-autograph sessions, Bonnet depicts the writer-to-be in authentic throes of composition—breaking a pencil, throwing her notebook across the room, and weeping with frustration before finally buckling down. Take note, budding authors. Poppy's paper is hard-won but worth the A it gets.

Self-confidence is not all it’s cracked up to be, as we learn from ebullient little Poppy in Susan Eaddy’s Poppy’s Best Paper, charmingly illustrated by Rosalinde Bonnet.
When Poppy’s teacher, Mrs. Rose, asks the class to write about what they want to be when they grow up, Poppy’s elated. She wants to be a writer. She dashes off a few quick lines and deems her paper ‘‘pretty much perfect.” But Mrs. Rose doesn’t read Poppy’s essay. She reads her friend Lavender’s paper about becoming a brain surgeon. Poppy takes so many breaks while writing her next assignment that she has to finish it on the bus. When Lavender’s essay on world peace wins, Poppy can’t handle the injustice. She ends up in the Chill-Out chair and, after some rude behavior at home, is sent to her room.
After a good cry and several broken pencils, Poppy has an idea. This time she writes a sentence and takes time to fix it. She doesn’t stop to play with her dog or call Lavender. She focuses. This time, when Mrs. Rose prepares to read the best paper on “How to Do Something,” Poppy is not overly confident. She sits very still.
Poppy’s paper is read aloud! She’s written “How to Get in Trouble,” a topic that plays to her strengths. Bonnet’s lively drawings are endearing and keep the story moving. Thumbs-up to clay artist Susan Eaddy on her debut picture book. She’s created a character readers will gladly visit again and again.