I Hate Running and You Can Too: How to Get Started, Keep Going, and Make Sense of an Irrational Passion (Paperback) 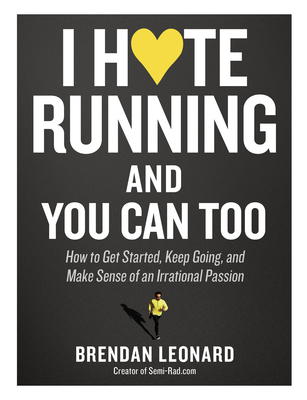 I Hate Running and You Can Too: How to Get Started, Keep Going, and Make Sense of an Irrational Passion (Paperback)


On Our Shelves Now
BRENDAN LEONARD HATES RUNNING. He hates it so much that he once logged fifty-two marathon-length runs in fifty-two weeks. Now he’s sharing everything he’s learned about the sport so that you can hate it too.

Packed with wisdom, humor, attitude, tips, and quotes—and more than sixty illuminating charts—I Hate Running and You Can Too delivers a powerful message of motivation from a truly relatable mentor.

Leonard nails the love-hate relationship most runners have with the sport. He knows the difficulty of getting off the couch, teaches us to get comfortable with being uncomfortable, embraces the mix of running with walking. And he shares all that he’s learned—celebrating the mantra of “Easy, light, smooth, and fast,” observing that any body that runs is a runner’s body.

Plus Leonard knows all the practical stuff, from training methods to advice for when you hit a setback or get injured. Even the answer to that big question a lot of runners occasionally ask: Why? Easy: Running helps us understand commitment, develop patience, discover self-discipline, find mental toughness, and prove to ourselves that we can do something demanding. And, of course, burn off that extra serving of nachos.
Brendan Leonard has completed more than a dozen organized ultramarathons and marathons, including three of the most difficult 100-mile trail races in America. In 2019, he set out to complete 52 marathon-distance runs in 52 weeks, and survived, while having fun part of the time. Leonard is a columnist at Outside, and his writing has appeared in Runner’s World, National Geographic Adventure, Climbing, and Alpinist and on CNN.com and in dozens of other publications. He directed the 2017 short film How to Run 100 Miles, which screened at film festivals in more than 20 countries and on six continents and was viewed more than 5 million times online. He is the author of Surviving the Great Outdoors and the coauthor of The Camping Life. He lives in Denver, Colorado. Find him on Instagram at @semi_rad.
“Filled with empathy, understanding, and enthusiasm, I Hate Running and You Can Too made us love running more than ever and gave us bonus love
for charts that make you laugh until your stomach hurts.”
—Megan Roche, MD, and David Roche, authors of The Happy Runner and coaches whose athletes have won more than twenty U.S. national championship races

“Brendan has a mad genius way to convey the mundane aspects of running. No matter if you’re a total newbie or veteran runner, this book just might make you run a little farther or faster and have a laugh while doing it!”
—Scott Jurek, seven-time champion of the 100-mile Western States Endurance Run and New York Times bestselling author of Eat Run