The Camping Life: Inspiration and Ideas for Endless Adventures (Hardcover) 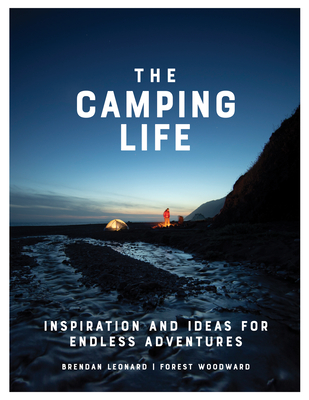 The Camping Life: Inspiration and Ideas for Endless Adventures (Hardcover)


On Our Shelves Now
Packed with expert information and inspiring photography, The Camping Life is the perfect invitation to leave the noise and screens behind—if only for a single night—and reconnect with nature. From backpacking to bikepacking, camping while white-water rafting to big wall climbing, outdoor adventurers Brendan Leonard and Forest Woodward cover it all: how to pack a backpack, how to set up a tent in the snow, how to camp with your dog, how to build a campfire, how to judge a river’s difficulty. And, critically, how to leave no trace, while returning refreshed, recharged, and alive with new experience.
Brendan Leonard has completed more than a dozen organized ultramarathons and marathons, including three of the most difficult 100-mile trail races in America. In 2019, he set out to complete 52 marathon-distance runs in 52 weeks, and survived, while having fun part of the time. Leonard is a columnist at Outside, and his writing has appeared in Runner’s World, National Geographic Adventure, Climbing, and Alpinist and on CNN.com and in dozens of other publications. He directed the 2017 short film How to Run 100 Miles, which screened at film festivals in more than 20 countries and on six continents and was viewed more than 5 million times online. He is the author of Surviving the Great Outdoors and the coauthor of The Camping Life. He lives in Denver, Colorado. Find him on Instagram at @semi_rad.

Forest Woodward is a climber, surfer, and adventure photographer whose work has appeared in Esquire, Outside, National Geographic Adventure, Climbing, Alpinist, Men’s Health, Surfer magazine, and many other publications. His clients include Filson, J. Crew, and Patagonia, to name a few. Find him on Instagram @forestwoodward.
“This beautifully photographed tome—shot in/on deserts, woods, and mountains around the country—is an ode to backwoods camping and the solitude, extra stars, and immersion in nature it affords. Acknowledging that there’s nothing easy about the task of hiking in with everything you’ll need for an extended stay in the wilderness, the authors offer detailed advice on what to pack for camping in the snow, camping with your dog, bikepacking, and more.”
—Sierra, the National Magazine of the Sierra Club