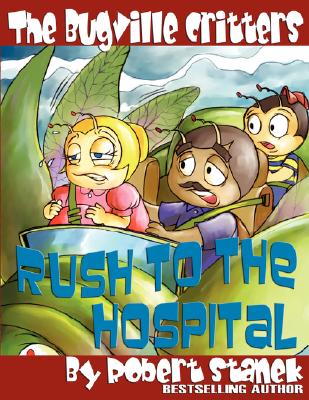 By Robert Stanek
$9.99
Availability to be confirmed
This book cannot be returned

Over 2.5 million Bugville books sold worldwide Read letters to Buster from kids all over the world at the Bugville Critters web site. In this story, Buster and his family return from vacation. Buster learns the value of doing what he is told. After all the hard work, Buster's mom has a special surprise for him, but there's an even bigger surprise waiting for Buster at Bugville General Hospital.

Stanek, acclaimed author of the popular children's books The Kingdoms and the Elves of the Reaches and Journey Beyond the Beyond, has selected an irresistible combination for young listeners: loveable critters and heart-warming stories. The Bugville Critters stories address all the major issues of growing up and are designed to appeal to the ever-growing interests of children everywhere. The wonderfully crafted story is paired with energetic illustrations of a colorful cast of crittters and playful scenes. This rollicking adventure is sure to be a favorite with the storytime crowd.

ABOUT THE AUTHOR: A gifted and distinguished writer, respected and skilled teacher and recipient of our nation's highest flying honor, the Distinguished Flying Cross, Robert Stanek wrote over 200 books of both fiction and nonfiction in his 30-year career. Although his works were published and/or distributed by nearly every major US publisher, including Simon & Schuster, Penguin Random House, Macmillan, Microsoft, McGraw-Hill, Hachette, and HarperCollins, Robert operated against the grain and became the first breakout author of the digital publishing movement. The first to serialize an ebook, the first to e-author a bestseller, and the first to e-author a digital audio bestseller. Robert is the recipient of multiple awards recognizing his outstanding contributions and excellence in writing, and a recent nominee for a Lifetime Achievement award. Translated into 57 languages, Robert Stanek's books have sold nearly 20 million copies worldwide.